Sicilia: The Cooking of Casa Planeta 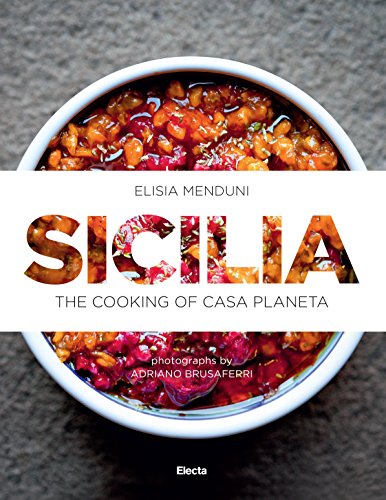 Casa Planeta is a large and old Sicilian wine company, producers of renowned and award-winning wines and olive oils, celebrated in this book by Elisia Menduni, where a collection of culinary traditions and family recipes collected from the extensive Planeta family are presented with stunning photographs. The photographs alone are worth the price of the book. However, most interesting and remarkable is the fact that Menduni doesn’t explore the roots of what is truly remarkable about this book. Let me explain by first providing an historical context.

Every book could have two titles, the marketing title and the title of what the book is really about. This book’s other title could be The Baronial Cooking of the Landed Aristocracy of Sicily. The aristocracy of 19th century Sicily employed French-trained chefs in their kitchens. These chefs were known as monzu from the French monsieur. They developed the secrets of aristocratic cuisine that are characteristically luxurious meals often tailored to the needs and desires of the families that employed them.

Their fabulous creations resided only in the recipe books of the families themselves, usually handwritten notebooks. Only a small handful of Sicilian researchers have ever had a chance to examine these books to create a more thorough history of the cooking of Sicily. The monzu chefs died out by the 1960s, so these precious handwritten notebooks is all we have about what cooking in Sicily looked like in an earlier time. Menduni hardly mentions this except a brief sentence in the introduction.

Menduni’s book’s chapters are organized based on where the Planeta vineyards are located. The descriptions of these areas are only very brief overviews. Her recipes are derived from her examining the handwritten Planeta family recipe notebooks. This is a treasure trove we are not introduced to. It’s as if archeologist Howard Carter upon discovering the tomb of King Tutankhamen told us he found a tomb without showing us the riches inside. But we do get a glimpse from the recipes collected here.

The book has Sicilian classics which one feels must be in every Sicilian cookbook, such as sarde a beccafico (baked stuffed sardines in the author’s translation, but literally meaning sardines, figpecker-style in Sicilian), or arancine (fried rice balls), or stoccafiso alla Messinese (stockfish from Messina).

But some recipes are left unexplained. For example, Melanzane “Ammuttunate” is offered with no explanations. It is incorrectly translated as “stuffed eggplant” although the correct translation, “blanketed eggplant,” gives the cook the sense that it is “blanketed” with sauce. It is a dish from Palermo but that is not mentioned by the author.

Another recipe, ova murini, is translated as cream-filled crêpes, when in fact it is an omelet whose true translation is “eggs, moray eel-style.” Why? The author doesn’t tell us, but it’s because the finished omelet has the color and look of the skin of a moray eel. We are not told that minni di vergini, a pastry whose shape and look is indicated by the real name not provided by the author, namely “virgin’s tits.”

The photographs are gorgeous and the recipes fine, but whether your finished dish will look remotely like these photos based on the parsimonious instructions of the recipes is doubtful. Examples of what might be the influence of the Sicilian monzu chefs such as timballo in crosta di ricotta look like magnificent challenges for the adventurous cook, but the author doesn’t identify them as such, missing an opportunity to explain cucina baronale, the baronial cuisine of the monzu chefs of the Sicilian aristocracy.

For what this book lacks in history and cultural explanation and context it makes up in photographs. The recipes are fine, but probably there is not enough instruction for novices to Sicilian cuisine. The book can be recommended for its beauty alone.