999: The Extraordinary Young Women of the First Official Jewish Transport to Auschwitz 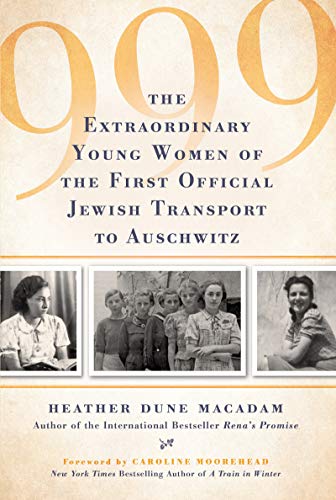 “brilliant . . . an important addition with its focus on the lives of women and its unbearably vivid details.”

The story of the first Nazi transport of Jewish young women, some only teenagers, in 1942 is harrowing—and sadly timely given the upsurge in anti-Semitic crimes and Holocaust denial all over the world. Macadam does a brilliant job of marshalling all her sources to show how these young women got on a train with they and their families thinking they were being sent to work in newly occupied Poland. The “work” was a pretense, of course, a way of convincing people to meekly follow orders. Instead, the women were sent to death camps. Some did in fact work, but in horrendously brutal conditions. Very few survived the camps. Those that did, returned to find their families murdered.

The ruse of work, the guarded letters home, gave the parents the illusion that their daughters were okay. Macadam has managed to track down some of these letters and cards, vividly bringing these stories to life. She describes the fate of the women as well as the dawning awareness of what was really happening by their families at home. “Magduska was dead. Bela was devastated, Eugene, her little brother, completely bewildered. They did not tell Magduska’s mother. Everyone was racked with guilt. They had practically scolded the girls for not writing. . . . How long had the girls been dead? How did they die? No one knew. Their lives and their deaths are a permanent question mark that hangs over the family to this day, with no answers ever to arise from the charnel ground of Auschwitz.”

Most of the stories are grim. This is a hard book to read, there is so much pain and inhumanity described in its pages. Every now and then, Macadam offers a glimmer of hope in all the savagery:

“The story is one that is still told around the Passover table: Grandfather Chaim was sitting on     the stairs outside their house when the Hlinka Guard came to cart him off to Auschwitz. He had wrapped his beautiful, hand-embroidered tallis or prayer shawl, with its ivory, powder blue, and             silver threads around his shoulders and planted himself on the stoop outside the family home. ‘I’m not going anywhere’ he told the guards.

“They threatened to shoot him. He shrugged—So be it.

“After much posturing bluster, the guards left Chaim sitting on the stoop alone because he ‘wasn’t worth the cost of a bullet.’”

Macadam ends the book with summaries of the survivors’ lives after the war is over, complete with the fates of the sadistic guards and commanders. Justice doesn’t protect the women after the war any more than it did during, with most of the murderers free to live their lives with whatever goods they had plundered from the Jews. “Neither Wunsch nor Graf was found guilty. ‘They were sadists,’ Linda says. ‘Even though I told them, and other witnesses told them. It didn’t mean a thing. . . . They were set free. They didn’t go to jail. What millions they brought out of Auschwitz, they took everything to Vienna—so they had ten lawyers and went free.’”

The library of books about the Holocaust is broad and deep. Still, 999 is an important addition with its focus on the lives of women and its unbearably vivid details. It should be considered essential reading for any modern history class.