50 Wacky Inventions Throughout History: Weird inventions that seem too crazy to be real! (Wacky Series) 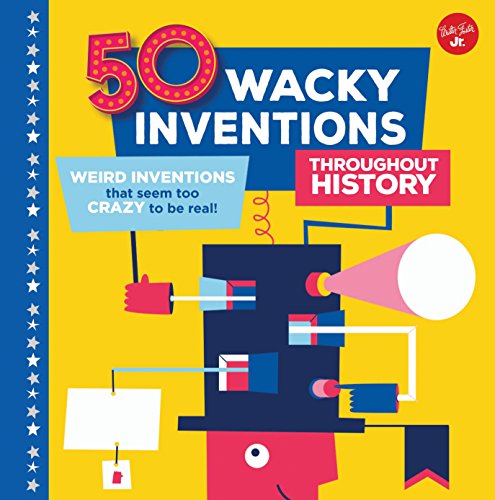 Weird & Wacky Inventions is an inspiring book for imaginative readers who are captivated by the impossible, the far out, and the really wild.

Thinking about creative ideas, how they come into an ordinary person’s mind, and what inspires the person to follow through is the thrust of this book. Ordinary things we use every day were invented by someone. A person or group had an epiphany, either wanting to improve upon an existing product, or they just got lucky in conjuring a new idea. In Weird & Wacky Inventions by Jim Murphy we can follow the process with great delight, from inception to its current incarnation.

We all know about the famous inventors: Ben Franklin, Thomas Edison, Eli Whitney who are responsible for the things that have contributed significantly to our quality of life today. But who knows the identity of the random business entrepreneur who felt there was a need for and invented a hair cutting machine?

Many inventions were inspired by technological advances. A small, portable power device known as the gas engine, when added to an existing product, resulted in something more powerful and of great usefulness. An important aspect of the process of invention is the notion of improving on an earlier or original idea.

Some inventions are discovered by accident. The bellows, used in a blacksmith’s shop to keep air going to the fire, was the basis of the “vacuum cleaning device” which was built on the idea of reversing the way a bellows worked. Walter Hunt, while fiddling with a wire and spring on his rifle that comprised the safety, accidentally discovered the common safety pin that you see attaching clothing tags to fabric among other uses.

Another invention was inspired by the natural world. A hunting decoy in the shape of a cow provided a camouflaged hiding place for hunters to bag game birds.

The author concludes with an afterword that stresses the importance of applying for a patent. Many will remember the Pet Rock. In less than a year over 500,000 Pet Rocks in a box were sold. Without a patent, anyone could have copied the idea and stolen a chunk of the sales.

Robert Patch invented and patented an intriguing toy truck that could be taken apart and put together in a number of different ways. Amazingly, Robert was only five years old at the time

One resourceful man became an inventor when he attempted to improve the safety feature on his rifle that never worked properly. In the process he accidentally invented the safety pin, which is an essential safety feature on many weapons. Today the item is so common, one doesn’t consider that someone actually had to invent it.

Jim Murphy uses multiple choice answer quizzes that engage the young reader’s sense of discovery and detailed consideration of the what and the why of common everyday objects.

Finally, the author points out that many of the items we use today were once considered weird and wacky—or may be viewed as such at some point in the future. This book encourages young readers to pay attention to the world around them and not to hesitate to attempt to either improve on something that doesn’t seem to be serving its purpose well enough—or to come up with brand new ideas all their own.