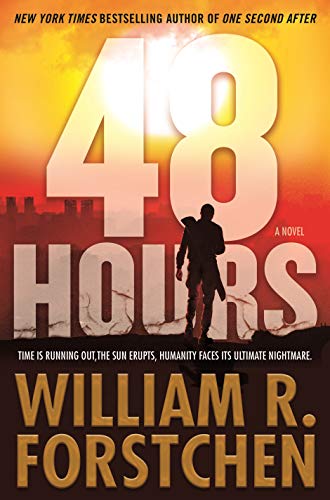 “Forstchen's fully developed characters face mind bending moral questions that readers will be forced to ask themselves on the way to the nightmare inducing ending.”

Readers who have read William R. Forstchen's John Matherson Series already know that he is the master of informed fiction. His book One Second After—which many think is his first book, it's not—described the after effects of an EMP (an electromagnetic pulse) hitting the Earth, and the dystopian results faced by survivors. Dystopian is the opposite of utopian, and means life as bad as it can get for humanity after an apocalyptic event. If any life remains, that is.

48 Hours is a journey to the end of that humanity following a Coronal Mass Ejection.

The book opens a month after a solar storm, a CME, has hit Earth and partially taken down the electrical grid in certain parts of the country. As a result, thousands of people have died. For the rest, there is suffering. No way to heat homes against the winter weather. No gas for cars. Contaminated drinking water. Food shortages. Hospitals are working on backup generators, at least for a while, but are unable to provide needed medications since transportation systems are down. (Think Katrina.)

In the states where the CME has not been so severe, power plants are still able to deliver electricity on a limited basis by providing rolling brownouts or by shutting down completely a few hours a day. It is in this environment that readers meet Darren Brooks and his wife Darla who are toughing it out waiting for things to get back to normal.

They're uncomfortable, but so far have found ways to live off the grid.

They had to give up morning coffee from their modern appliance and make do with their old stovetop coffee percolator. Luckily they didn't throw it out when the Keurig replaced it. But the propane used to run the stove is nearly depleted.

Then comes dire news over their battery operated radio.

In less than 48 hours, another solar storm will hit Earth, this one so powerful it will potentially destroy the electrical infrastructure of the entire world, which for most of humanity pretty much means the end of life on Earth.

Right up front, Forstchen devotes several pages to explaining and defining the mechanics of a CME, and the resulting damage to our vast, technological world, cleverly presenting it in such a way that even the most non-scientific readers will not only understand it, but be compelled to read it word for word.

"If enough energy breaks through our magnetosphere and reaches Earth's surface, it can feed into all the millions of miles of wires that distribute electricity coming from thousands of generating plants around the world . . . Its energy will hit millions of miles of power lines and surge through those lines in the blink of an eye, feeding into tens of thousands of high energy transformers and from there into power plants, overloading them, and then boom. Our power grid is blown off line."

Anticipating this, the federal government, in an effort to limit the damage to what's left of the power grid, is lowering the power supply to make it less susceptible to an overload of energy from such a CME hit, and encourages citizens to do the same:

". . . What we have to do as a nation, in fact an entire modern world, is to do the same thing any prudent person would do if a huge thunderstorm was coming straight at their house. Go outside and pull the circuit leading into your home. . . pull the plug on every computerized component in your home . . .

"The best way to protect our electrical grid around the world and the internet is to turn off or at least power down every electrical component from inside where you live on up to the massive gigawatt power plants lighting up New York and Vegas. We have to power nearly everything down before the storm hits and then wait for it to pass. . . ."

Darren still has enough gas in his Jeep to get to his job as security director of a two and a half million square foot abandoned underground quarry that has been turned into a municipal warehouse owned by the State of Missouri. Fully functional with its own power source and back up propane-fired generators, 200,000 square feet of the storage facility has been leased to Kraft Foods as their primary warehousing and distribution center for a three state region. Housed inside their double locked space is enough food to feed more than ten thousand people for months.

At this point in the story, readers may release that pent-up breath they've been holding, relieved that a source of sustenance exists for survivors that will somehow save them.

But not so fast.

Despite the pandemonium at the entrance to the facility, citizens demanding that they or at least their children be admitted, the military shows up wanting access to the food.

There are two sections of italicized pages in the book. Both describe the reactions of those facing certain death. Both are heartbreaking.

Forstchen's fully developed characters face mind bending moral questions that readers will be forced to ask themselves on the way to the nightmare inducing ending.

How would you face an Extinction Level Event? Would you be able to find a way to help neighbors in need? Would you go to church or would you steal a Ferrari and go for one last joyride? Would you lie to your children and tell them not to worry, that everything is going to be okay even though you know it's not?

This is not science fiction. It's a cautionary tale. This can and has happened. In September 1859, before the technological advances of today, Europe and America were hit by an explosion on the surface of the sun strong enough to burst railroad ties into flame. More recently, in July of 2012, a CME rocketed away from the sun and entered Earth's orbit narrowly missing our beloved Blue Planet.

Be sure to read the author's afterword. He tells an interesting story about how he came to write this book and others.

And, oh, yes. Don't get rid of your old stovetop coffee percolator.