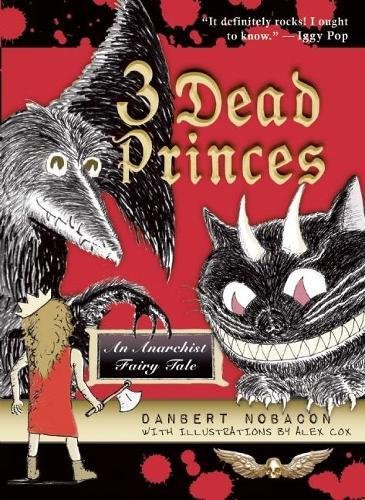 Danbert Nobacon, whose penname seems to be derived from an old knock-knock joke, is best known for his part in the rock band Chumbawamba. (“I get knocked down, then I get up again.” Yes, that’s the one.) He describes his first book, 3 Dead Princes, illustrated by cult moviemaker Alex Cox, as “an unfairy tale for nine to ninety-nine year olds.”

And if you’re already wondering whether the terms “unfairy tale” or “anarchist fairy tale” presage something truly juvenile and awful, you can relax; 3 Dead Princes is a very sweet tale of a young princess who finds herself on a quest to save her father and their kingdom from ruthless invaders. It has all the usual fairytale elements—a kindly old king, a wise and resourceful fool, a stepmother, a witch, wicked villains, talking animals, hairy half-men, and so on—and the tale unfolds in a perfectly satisfying way.

Even the fact that the main protagonist, Princess Stormy, is a 13-year-old girl isn’t at all unusual these days. Her quest to find and rescue her father, the king, and to save her country from invasion, is a reversal of the usual way fairytales are done but, again, quite within the parameters of modern storytelling. And the anarchy? Well, as Nobacon explains at the end of the book, his notion of anarchy is a benign kind of communal democracy, stressing individual moral responsibility.

Yet in some ways this is quite a long way from being the usual kind of fairytale. In fact, a better way to describe it might be as a post-apocalyptic, hard science-fiction novel.

From early in the story, we understand that the world we are in is our own, many millennia in the future, as it recovers from a dreadful calamity that destroyed everything we now know. The half-human creatures, the giant talking bird, the dragon-like flying lizards—all are explained as ancient genetic tinkering, or the changes wrought by subsequent evolution. Even the magical artifacts are simply relics of our own long-lost civilization—a fact that is used quite poignantly at the end of the book.

Throw in a few other unexpected elements—an attempted rape, a lot of down-to-Earth realism from all kinds of characters, menstruation, and, of course, the three dead princes—and Nobacon turns out to have written a surprisingly good and intelligent story. Given this, the creation myth in the chapter “Does God Go to the Toilet?” seems oddly out of place, an excuse for some lavatory humor, perhaps, to pander to the kids. Yet this is in fact a link back to an earlier work by Nobacon, and strongly echoes the lyrics from his 1985 album The Unfairy Tale.

Parents looking for a book for a middle-grader would be hard pressed to find a more sophisticated yet accessible story. Yes, there is a bit of swearing in it, and yes, there are some fairly grown-up themes introduced, but as a springboard for sensible and informed discussion with youngsters about how we live and how we might live, it is hard to think of a better book (the publisher recommends it for YA readers age 12 and up). Even as an adult reader, the story is interesting and intelligent enough for you to find it worth your while.

In fact, the maturity of the book begs the question: Why didn’t Nobacon write it as a straight sci-fi novel? This would have given him the scope to develop characters that, while interesting, are quite sketchy. He would also have been able to fill in more of the backstory—the history of how the world got to be the way it is—and to make clearer the ideological basis of the book, without having to resort to an explanatory section at the end. There would have been less scope for cutesy neologisms, of course, but that might not have been such a bad thing. The charming and quite witty illustrations would also have had to go, which would have been more of a loss. Perhaps, in the end, the answer is that the book would have been less fun to write.

Because of its ambiguity about its target age group, 3 Dead Princes is a bit of a marketing puzzle. It is a very good fairy story that would appeal to brighter kids. It is a post-apocalyptic sci-fi story replete with ideas, eschews the fantastical, and is full of a sense of the magical wonder of the real world. Yet its occasional ”bad language” and its challenging inclusion of themes such as rape and menstruation are likely to put many parents off buying it. And that would be a shame because, as a fairytale for youngsters, it would almost certainly encourage reflection and provide opportunities for discussion.

As an adult novel, being cast as a fairytale—even an unfairy tale—is liable to put most readers off. 3 Dead Princes might have enjoyed more commercial success as straight sci-fi. Perhaps the true audience for the book will be freethinking 13-year-olds who will find the world of Princess Stormy a place that will fire their imaginations.