24: Life Stories and Lessons from the Say Hey Kid 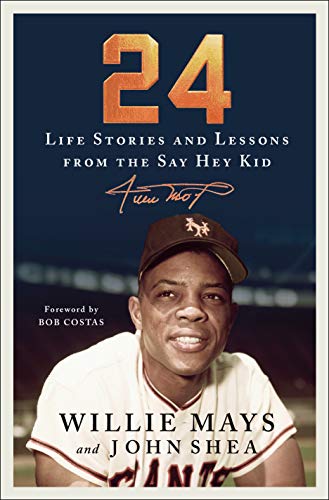 “Humility, dignity, and character—those were Mays’ personal trademarks. He was an exemplary baseball player and is an exemplary citizen.”

One of the first books I ever read was a biography of San Francisco Giants’ star centerfielder Willie Mays. My father purchased it for me at the Baseball Hall of Fame in Cooperstown, NY. It was in 1966 or 1967—I was seven or eight years old. Mays was my favorite player, despite being raised in a home of New York Yankee fans.

My childhood friends, my brother, and I frequently debated and argued about who was baseball’s best player: I said Mays, my brother said Mickey Mantle, while some of my friends picked Hank Aaron or Roberto Clemente.

I saw Mays play in person three times—twice against the Philadelphia Phillies at Connie Mack Stadium (in one game he homered and in the other he hit two triples), and once against the New York Mets at Shea Stadium (he homered and threw a runner out at home). I read the Giants’ box scores in the newspaper every day and anxiously waited for a Giants’ game to be televised on NBC’s “Game of the Week.”

All of these memories and more came back to me when reading 24: Life Stories and Lessons from the Say Hey Kid by Willie Mays and John Shea. This is not a complete biography/autobiography of Mays—for that you need to read James S. Hirsch’s Willie Mays: The Life and the Legend—but it is a book that reveals and reflects on the greatness of Mays as a player and, more important, the greatness of Mays as a person. Willie Mays understands that a person’s character—how he lives his life and treats others—is far more important than anything he accomplished on the baseball field.

Mays played in Major League Baseball from 1951 to 1973. He won the National League Rookie of the Year Award in 1951, served in the army in 1952 and 1953, was the league’s Most Valuable Player (MVP) in 1954 (hitting .345 with 41 home runs), and that year led his team to a World Series victory over the Cleveland Indians. In that World Series, he made a defensive play in centerfield in the Polo Grounds that is still known as “the Catch.” He won the MVP again in 1965, hitting 52 home runs. He ended his playing career with the New York Mets, helping the team win the National League pennant.

Mays excelled at every aspect of the game. Most of the players interviewed for the book commented that Mays was a “five tool player,” meaning that he could hit, hit for power, run, field, and throw. The statistics back that up: 660 home runs, 338 stolen bases, 12 straight Golden Glove awards, a lifetime .302 batting average, 7095 outfield putouts.

But there was something more about Mays—a sixth tool that has been described as “visualizing the whole game.” Mays explains it this way: “You’re knowing ahead of time what to do in all situations and making sure to be in the right place when you need to be.” This was more than instinct. It was a mental approach to the game.

It was a mental approach that served him well during his career and that he willingly passes on to any ballplayer that seeks his advice. And many players have sought that advice. Former Giants player Will Clark in 1986, for example, told Shea: “I talked to Willie Mays every chance I got. I mean, good Lord, where else are you going to get that kind of information? That’s the best player in baseball . . . I tried to pick his brain as much as possible.”

Each chapter of the book focuses on one of life’s important lessons that are reflected in Mays’ life and career. Several of those lessons involve honoring and showing gratitude to mentors and friends of Mays who paved the way to his success: his father Willie Howard Mays, Sr; his teammates in the Negro League; his first manager Leo Durocher, who inspired confidence in a young Mays who initially doubted his ability to play major league ball; Monte Irvin, his Giants’ teammate who, Mays writes, “made sure I didn’t get into trouble”; and Jackie Robinson who courageously paved the way for all African American baseball players.

Mays’ gratitude and friendship extended to his opponents and peers: Hank Aaron, Duke Snider, Mickey Mantle, and many others. Mays respected them all and genuinely liked them all. There are no scores to settle in this book, not even for former baseball commissioner Bowie Kuhn who unfairly suspended Mays (and Mantle) from Major League Baseball when Mays after retiring took a job as a goodwill ambassador at an Atlantic City Casino.

Shea notes that Mays played baseball with unparalleled skills and with a unique style. “Baseball’s greatest star,” Shea writes, “was baseball’s greatest entertainer.” Mays patented the “basket catch” and ran the bases with such zest and speed that his cap frequently flew off his head. He had fun playing baseball and wanted to entertain the fans. “You have to have fun out there,” Mays writes. “If you don’t have fun, you can’t play the game . . . You have fun, now the fans are having fun.”

Another aspect of Mays’ greatness as a player was his work ethic and endurance. He rarely missed a game due to injuries. Shea points out that between 1951 and 1962, Mays played in 1534 of 1555 games. He loved the game and played to win. For Mays, winning was more important than padding his statistics. He could have hit more home runs and stolen more bases, but he always did what was best for the team.

Mays believed his most important contribution to his team was his defensive play. “Defense was my thing,” he writes. “[D]efense, you have to bring it every day.” He made incredible catches in centerfield—some even greater than “the Catch.” He had a great throwing arm—strong and accurate. He made great plays look easy. He prided himself on preventing runners from taking an extra base on a hit. He studied hitters and knew his team’s pitchers so that he could position himself better in the field.

Shea references an annual statistic called Wins Above Replacement (WAR), which he describes as “an all-encompassing statistic that measures players’ overall contributions, not just on the offensive side, and allows for better comparisons of players in different generations.” Mays ranked in the top three in WAR 11 times in his career, one less than Babe Ruth. Shea suggests that Mays should have been named National League MVP eight to eleven times, instead of just two.

The greatness of Mays the baseball player was reflected in his greatness as a person. During his career, Mays was subjected to racial slights and discrimination, but he never became bitter. Some Civil Rights leaders and some African American ballplayers criticized Mays for not speaking out and being more confrontational about segregation and Civil Rights issues, but Mays, Shea notes, “dealt with bigotry in his own way.” “He united people from different walks of life with his passion and persona and fought discrimination on his terms. He tried to break down prejudicial barriers by demonstrating character and leadership.”

In other words, Mays led by example. As former President Bill Clinton remarked, “Because of the way he played and the way he conducted himself, Willie Mays made it absurd to be a racist.” Clinton was not the only president to praise Mays. It was a bi-partisan phenomenon. As Shea notes, “He hung out with Richard Nixon at [a] Candlestick Park opener, played golf with Gerald Ford, . . . crossed paths with Jimmy Carter . . . knew Ronald Reagan the actor before Ronald Reagan the president, talked baseball with the Bushes, and met Donald Trump at a long-ago boxing match.” President Obama gave Mays the Medal of Freedom and a ride on Air Force One.

Willie Mays knows all about the flaws of his country, but he loves it and served it honorably in the army. “You’ve got to serve your country,” Mays remarks, “and that’s what I did.” He has served his fellow citizens in other ways, too. He frequently visits with ailing children and their families at a children’s hospital in Stanford. He has a charitable foundation that helps schools, hospitals, youth sports, Boys and Girls Clubs, public safety, and violence prevention programs.

Humility, dignity, and character—those were Mays’ personal trademarks. He was an exemplary baseball player and is an exemplary citizen.