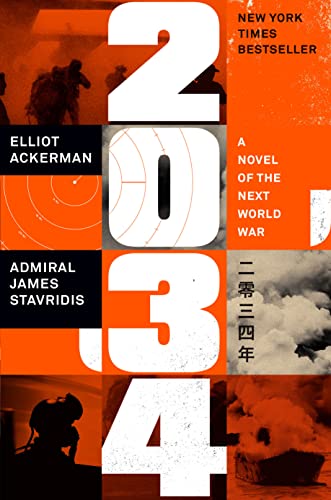 “2034 is a haunting, disturbing, cautionary tale about what can easily happen if international conflict is allowed to reach the boiling point.”

It begins in the South China Sea with an unflagged fishing trawler in distress, black smoke and orange flames reaching into the sky. United States Navy Commodore Sarah Hunt, on the bridge of the USS John Paul Jones, is commanding a routine freedom of navigation patrol when her small flotilla encounters the trawler. She orders her captain to change course and render aid.

What follows is a series of dominos that quickly falls as China, which planted the trawler in Hunt’s path to set a trap, springs a cyber attack to eliminate American electronics and communications channels, enabling them to sink Hunt’s flotilla on the spot. Simultaneously, Iran deploys a similar cyber attack on a US Marine F35E stealth fighter over the Strait of Hormuz, allowing them to capture a US Marine aviator to use as a pawn in the hostilities to come.

2034: A Novel of the Next World War is a speculative thriller by Elliot Ackerman and Admiral James Stavridis that seems all too plausible. Following in the footsteps of such classic apocalyptic war novels as On the Beach by Nevil Shute (1957), Red Alert by Peter George (1958), and Fail Safe by Eugene Burdick and Harvey Wheeler (1962), 2034 paints a dystopian picture of a world primed for a nuclear war that seems as effortless as it is unavoidable.

Elliot Ackerman is the novelist on the team. His impressive list of publications includes Green on Blue (2015), his debut novel set in Afghanistan, told from the point of view of a local boy; Waiting for Eden (2018), concerning an Iraq War veteran waiting to die in a San Antonio burn center; and, Red Dress in Black and White (2020), the story of an American woman attempting to escape her life in Istanbul.

He’s also published at least two dozen articles on ISIS, the Afghan war, and other similar subjects in such publications as the New Yorker, the New Republic, the Daily Beast, Atlantic, and Esquire.

More impressively, he’s a Marine Corps veteran who served multiple tours of duty over eight years in the Middle East and Southeast Asia. During his military career he was awarded the Silver Star and Purple Heart, both for service in Iraq, and the Bronze Star for Valor, awarded for service in Afghanistan.

His writing partner for 2034, Admiral James Stavridis, served more than three decades in the US Navy, rising to the rank of four-star admiral. At sea, he commanded a destroyer, a destroyer squadron, and an aircraft carrier battle group. He also served as Supreme Allied Commander at NATO, spent five years as dean of Tufts University, and has written nine previous books about the navy, his personal experiences, and seamanship.

With such impressive credentials, the question becomes whether or not Ackerman and Admiral Stavridis can write a political thriller that not only matches their expertise but also entertains lay readers who are simply looking for a good story.

The answer? Yes, they certainly can.

The novel is structured around four different points of view: Captain Sarah Hunt and her actions at sea, likely drawing on Admiral Stavridis’s personal experience; Dr. Sandeep Chowdhury, US deputy national security advisor; Admiral Lin Bao, who reluctantly ends up as the point man in China’s aggression against the United States; and Brigadier General Qassem Farshad, a former rising star in the Iranian Revolutionary Guard who ultimately plays a key role in the resolution of the conflict.

An Achilles heel for many international political thrillers is an inability to narrate portions of the story from the points of view of foreign adversaries in a realistic way. Inevitably they end up sounding like bad caricatures from low-budget movies, speaking in broken English, indulging in local customs obviously cribbed from outdated guidebooks, and generally alienating an audience simply looking for a reasonable amount of verisimilitude to go along with a healthy serving of global action and adventure.

Imagine one’s surprise, then, to realize halfway through 2034 that Lin Bao and Farshad are in fact excellent characters, well drawn, realistic, and remarkably engaging. Perhaps we shouldn’t be surprised, after all, since Ackerman’s earlier novels drew effusive praise for his ability to present convincing and credible points of view from other cultures.

Furthermore, despite the frantic and truly frightening nature of the story being told, the prose is calm and measured, almost elegant at times. For example, the novel opens with this minor gem:

“It surprised her still, even after twenty-four years, the way from horizon to horizon the vast expanse of ocean could in an instant turn completely calm, taut as a linen pulled across a table. She imagined that if a single needle were dropped from a height, it would slip through all the fathoms of water to the seabed, where, undisturbed by any current, it would rest on its point.”

After such a deceptively placid opening, how could you possibly resist turning the pages to see where all of this will be going?

2034 is a haunting, disturbing cautionary tale about what can easily happen if international conflict is allowed to reach the boiling point. Make sure to add it to your spring reading list.