1972: The Series That Changed Hockey Forever 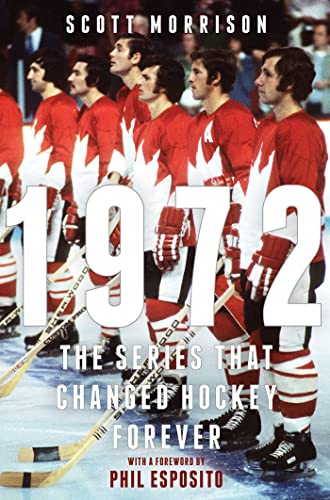 “a fascinating and well-written piece, capturing this moment in hockey history. It is a must read for those who remember the Series, and even more so, for those who do not or are too young to remember the ‘Henderson goal’ and all that led up to it.”

In early October of 2001 at an International Hockey Conference in Halifax, Nova Scotia, a presenter from the Canadian Broadcasting Corporation posed a question to the 40 or so people in the room: “How many of you know where you were when the Henderson goal was scored?”

All but three people, including one Russian, raised their hands. Two from Sweden and one from the United States did not. Not only could these Canadians and one Russian tell you where they were, but they could recount details of the moment and the day. Often, they were with a group of people watching on television or listening on the radio. They were scattered across Canada in bars and diners, in homes, and for some, at Government House with the Governor General of Canada. It was a moment that had the undivided attention of the nation.

It is this moment, and all of the events and people leading up to this moment, that is the subject of Scott Morrison’s new and fascinating account of the Summit Series. Since the early 1950s, the Soviet Union had committed itself to challenge the west in sports, an area in which the Soviets felt they could find success and an area that would bring them prestige across the globe.

By 1972, the Soviets were at the top of international hockey competition with only the National Hockey League, and, in particular the Canadian professionals, overshadowing them. The 1972 Summit Series would be the first competition between a Canadian national team of NHL players and the Soviets, and, for the Canadians, there was no doubt about the eventual outcome.

The idea for the series grew out of a conversation between Alan Eagleson, hockey agent and later head of the Players Association, and a small group of prominent hockey people. It began in a cottage north of Toronto during the 1966 World Cup when Eagleson asked why Hockey did not have a similar event. Over the next several years, that conversation widened in the Canadian hockey community and in the political arena. In 1969 Hockey Canada was created by Prime Minister Trudeau.

One obvious problem for Canadian teams in international competition was that they used only amateur players. This was a disadvantage when competing against “professional” state sponsored teams such as Czechoslovakia and the Soviet Union. Canada’s 500 best players were in the NHL and unable to compete in the amateur tournaments.

What came out of these and other conversations was a start/stop movement toward NHL participation internationally. The Summit Series was the highest profile of the events in this development. It came out of contacts made in the world of diplomacy between Canada and the Soviet Union at the highest level and from a meeting between a mid-level Canadian diplomat in Moscow and the Snowman, a Russian newspaper columnist.

After the Soviets won their third straight Olympic Gold Medal in 1972, Canadian and Soviet officials met one month later at the World Championships in Prague. In April, an agreement was reached for an eight-game series between the Canadians and Russians. The first four games were in Canada and the next four in Moscow, all in September.

The task for Canada was to put together a team of NHL stars. Several problems developed as some players were reluctant to give up their summer break to play in this series that Canadians did not regard as a major event. Players, the public, and the press all assumed that this would be an exhibition in which Canada would demonstrate their hockey superiority with nothing really to be gained.

The head coach for Canada was Harry Sinden, who had led the Boston Bruins to a Stanley Cup 1n 1970, their first in 29 years. He was available because he left Boston over a salary dispute. Sinden hired John Ferguson who had retired from the Montreal Canadians in 1971.

One of the key players, who did not want to play in the Series, was Phil Esposito. He was finally persuaded to join the team by Bobby Orr, whose injury would keep him out of the Series. In total, there were 35 players on the roster, and that proved to be a problem as there was not enough playing time to go around.

Four Canadian cites were chosen to host the games that would be played in order: Montreal, Toronto, Winnipeg, and Vancouver. To say that the four games in Canada were a disaster might be a slight overstatement, but only slight. The Soviets pounded the Canadians in Montreal, sending shock waves through the team and the nation. Canada won in Toronto in a physical 4-1 game. Then in Winnipeg the teams tied when the Canadians blew a two-goal lead with under five minutes remaining in the game. Then in Vancouver the Canadians were humiliated again and were booed off the ice by their fellow Canadians.

The team left Canada for Sweden and eight days of practice including two exhibition games, with the boos in Vancouver still ringing in their ears. The stopover in Sweden proved to be an important time in molding this group into a team. Harry Sinden decided that his Moscow active roster would be 20 players, another significant move. By this time, the players were rounding into NHL game level conditioning.

In Moscow in Game Five, the Canadians again lost but played well. Three thousand Canadian fans who made the trip appreciated the effort and gave their team a standing ovation as they left the ice. The players all commented on the importance of this support, especially in this moment.

The next three games were tense and full of excitement and controversy. Scott Morrison captures it all in his dramatic rendering of the game action and the off-ice dramas. Each game had its ups and downs, its heroes and villains. Games Six and Seven were won by the Canadians, and so, going into Game Eight the series stood at three wins each with one tie.

All of this led to high tension and drama culminating with the aforementioned “Henderson goal,” maybe the most significant goal in Canadian hockey history breaking a tie in the waning moments of the game.

There are only two problems with Morrison’s 1972: There is considerable repetition of comments and quotes, some of which serve a purpose, while too many do not; and the opening develops too slowly, which may be mirrored in this review.

Beyond these quibbles, and they are just quibbles, this is a fascinating and well-written piece, capturing this moment in hockey history. It is a must read for those who remember the Series, and even more so, for those who do not or are too young to remember the “Henderson goal” and all that led up to it.