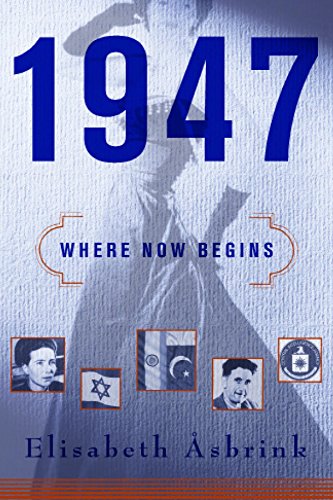 Every so often in this unusual and uneven book, a phrase or a scene makes a sudden unexpected connection between past and present, like the spark when an electric current flashes across a gap between two pieces of wire.

A perfect example is its account of the S.S. Exodus affair in the summer of 1947, when British warships prevented more than 4,500 Jewish refugees aboard that ship from landing in Palestine. Few if any readers will read that story without being reminded of today's worldwide migration crisis and the anti-migrant backlash in Europe and in the United States.

A similar resonance comes from these lines about a different group of refugees, Palestinians fleeing a place called Halissa in December 1947, at the outset of the great Arab exodus that would continue in the following year before and after the establishment of the Israeli state:

"Large numbers of people who are packing up their belongings amid gunfire and exploding bombs. . . . Children and their schoolbooks, photographs, jewelry, a pipe, the infinite weight of days gone by, sensory impressions that have matured into experience. Keys on strings around their necks, no chains, keys that leave their lock, children who leave their games under rosebushes, children who leave doors and locks behind them and hang up keys in their memories. Keys in hands, under dresses, on a chain around someone's neck, on a cord, the key cold against the skin. . . . They flee, but never cease to look back. Never."

Though they are about a specific event in a specific place, no one reading those words could fail to see that they could have been written from countless places in the world today or on just about any day in the last seven decades.

That passage is a good example of Elisabeth Åsbrink's poetic language. It's also a good example of her history, which one could say is poetic, too—an impressionistic assembly of vignettes, rather than a unified or coherent narrative.

Here, characteristically, she tells us the name of the place but not where it is (a district of Haifa) or anything about the circumstances that led its Arab residents to flee their homes.

The rest of 1947: Where Now Begins has the same fragmented quality. Åsbrink, a journalist and author from Sweden (where this book was originally published, in Swedish) structures her book like a calendar, with a chapter for each month. In turn she divides those chapters into separate vignettes on different events in different places. Some of these are snippets of only two or three lines; others fill a page or two or occasionally five or six. Events that unfolded over the year are not told in a continuous narrative but in brief snapshots scattered through different chapters.

Midway through the book, Åsbrink departs from her chronology to interpolate a chapter about her Hungarian Jewish father, a child during World War II whose mother managed to save him from the mass deportation of Jews during the Nazi occupation of Budapest. That story, too, is told in a succession of detached scenes, without many connecting or explanatory details (we never learn, for example, how or when he got to Sweden).

There are two large anomalies in this book. One is that its frame is far narrower than the title suggests. Though vivid, its vignettes do not even come close to covering the full range of critical 1947 events that shaped the subsequent course of world history.

The civil war in China that would bring the Communists to power in the world's most populous nation is not mentioned in these pages. Nor is Korea, where the cold war would turn hot just a few years later. Aside from a few very superficial passages on Indian independence and the bloodsoaked partition of India and Pakistan, Åsbrink says nothing about the uprisings against European colonial rule in Indochina and elsewhere in Asia, one of the most consequential developments of the early post-World War II years. Nor does she mention South Africa, then on the brink of the apartheid era, or nationalist stirrings anywhere else on that continent.

One other omission—less significant but perhaps more surprising, because the Holocaust is one of her prominent themes—is that Åsbrink nowhere mentions that The Diary of Anne Frank, possibly the most influential Holocaust book of all time, was first published in 1947. That gap is all the more mysterious because she does write about two other authors, George Orwell and Simone de Beauvoir, in snippets that are much less meaningfully connected to the broader history of that year.

A second anomaly is that the author does not entirely stick to her own calendar but slides away from time to time into stories that did not actually take place in 1947. Sometimes she makes that clear to the reader, sometimes not.

Some of those off-year episodes are more substantive than anything in the book that is consistent with the title. Åsbrink's treatment of the Nuremberg trials is one example. In several segments on those trials, by far the most revealing material is a long excerpt of testimony by a senior Nazi commander (at six pages, one of the longest passages in the book on any subject).  But that transcript is from early 1946, not the 1947 proceeding she is ostensibly writing about. Her text does vaguely indicate that the testimony she quotes was not in the same trial, but it does not mention the actual date, and the wording is so oblique that many readers will not pick up the clue at all.

Similarly, the book's final chapter includes a piece on Deir Yassin, where Zionist paramilitaries killed more than 100 Palestinian Arabs, including unarmed civilians and women and children. Again, though even more obliquely than in the Nuremberg segment, the wording does give a subtle hint that the incident was not actually in the month named in the chapter title. But a reader who doesn't already know that the killings took place in April 1948, not in 1947, is unlikely to figure that out from Åsbrink's language.

Åsbrink acknowledges those anomalies, sort of, in her closing page, where she writes: "Maybe it isn't the year I want to assemble. What I am assembling is myself"—herself and the accumulated grief of her family's and the world's history.

That is certainly a legitimate purpose. But it does undercut her unstated but clear premise that relating the events of a particular year will lead to deeper understanding of the years and decades that followed. For many reasons, this book may not convince you that now began in 1947. It may convince you, though, that now is longer than you thought it was.