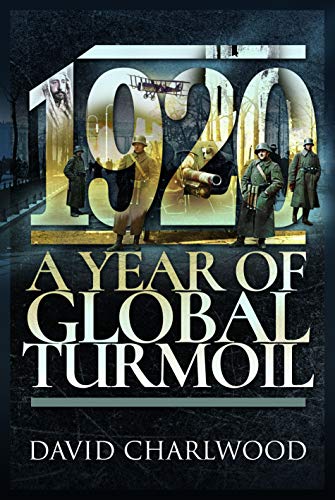 “Charlwood’s book is divided into 55 short chapters that describe the conflicts that continued to rage after Versailles; conflicts that the League of Nations proved helpless to resolve.”

When French Marshal Ferdinand Foch heard the terms of the Versailles Treaty ending the First World War, he remarked with what Winston Churchill described as singular accuracy: “This is not peace; it is an armistice for twenty years.” British historian David Charlwood in his new book 1920: A Year of Global Turmoil shows that while the armistice stopped the major fighting between the great powers, fighting on a lesser scale continued in many parts of the world.

When the guns fell silent on the Western Front in November 1918, there was great hope—much of it inspired by the utopian rhetoric of U.S. President Woodrow Wilson—that a peaceful and democratic world order would replace the world of great power competition.

Charlwood begins his book with the first Council meeting of the newly established League of Nations on January 16, 1920. Leon Bourgeois, the Chairman of the League, proudly proclaimed at the Quai d’Orsay in Paris: “January 16, 1920 will go down in history as the date of the birth of the new world. Decisions to be reached today will be in the name of all nations . . . together for the first time . . . to substitute right for might.” It was pure Wilsonianism—dreams replaced reality.

The next day, Charlwood notes, Britain’s Secretary of State for War Winston Churchill sounded a skeptical note: “Don’t you make any mistake. You’re not going to get your new world. The old world is a good enough place for me, there’s still life in the old dog yet. It’s going to sit up and wag its tail.”

Churchill was right. The League of Nations, Charlwood writes, “was founded on a fallacy: the peace that the organization supposedly existed to maintain had never really begun.”

Charlwood’s book is divided into 55 short chapters that describe the conflicts that continued to rage after Versailles; conflicts that the League of Nations proved helpless to resolve.

In Russia, civil war between the Bolsheviks and their opponents (grouped together in name only as the “Whites”) further devastated a country and a people who had suffered terribly during the Great War. Britain for a time provided assistance to the Whites, but only half-heartedly and in insufficient quantities to affect the outcome, much to the dismay of Churchill who wanted to strangle Bolshevism in its cradle before it could threaten the West.

In Germany, right-wing conspirators Wolfgang Kapp and General Walter von Luttwitz attempted a coup d’etat in March 1920 in Berlin. It succeeded, but only briefly, mainly because a majority of the civil servants and the German military refused to back the coup. Charlwood notes that one of the coup plotters’ associates was Adolf Hitler, who one nationalist leader described as a “motive force” and “a popular speaker of the first rank.”

The British meanwhile confronted rebellion in Waziristan (the Punjab region of their empire in India that is situated near the Afghan-Pakistan border), uprisings and terrorism in Ireland, and struggles for power in the territories of the former Ottoman Empire, including Iraq, Syria, Palestine, and Armenia. The British response to this turmoil varied from indifference to Armenia, support for a Jewish homeland in Palestine, a search for friendly Arab regimes to ensure British access to a plentiful supply of oil, forcible suppression of Arab uprisings, to organized atrocities in Ireland.

Poland, newly created by the peacemakers after having been partitioned out of existence by Russia, Austria, and Prussia, invaded Russia in April 1920. After initial success, the Polish army was stopped at Kiev and the Russians went on to the offensive under Marshal Mikhail Tukhachevsky. Soon, Warsaw was in danger of being overrun by Soviet armies and the Western powers feared that the Soviet armies would not stop at Poland. “Once again,” Charlwood notes, “war was raging in Europe.”

In July 1920, an Arab uprising in Mesopotamia (Iraq) led to more fighting, especially near the town of Rumaitha. Britain used airplanes to strafe rebel positions, but the rebellion spread to other towns and villages.

Turkish forces under Kemal Ataturk invaded Armenia in September 1920. In late November, Soviet forces invaded the small country and set up a Soviet puppet regime. The League of Nations, notes Charlwood, passed resolutions but stood helplessly by as Armenia disappeared from the map. Britain’s Prime Minister David Lloyd George remarked, “The League of Nations is, I regret to say, deceptive and dangerous. They cannot even protect a little nation like Armenia. They do nothing but pass useless resolutions.”

Gertrude Bell, a British official in Baghdad at the time whose letters are quoted extensively by Charlwood, aptly described Asia from the Mediterranean Sea to the Indian frontier as “a devil’s cauldron.”

Charlwood is critical of the United States, especially the Harding administration, for refusing to join the League of Nations and retreating to isolationism after the Great War. He accepts the conventional view of Harding as a populist, corrupt non-entity who failed at a critical moment to assert U.S. influence in global affairs.

This is unfair to Harding. He received more than 60% of the popular vote in the 1920 presidential election with a promise of a return to “normalcy” after the global conflagration. While some in his administration were corrupt, Harding presided over prosperity and peace, and refused to commit American forces to the “devil’s cauldron” raging in parts of Europe and Asia. British historian Paul Johnson had it about right when he described Harding as “an honest and shrewd president, prevented by his early death . . . from becoming, perhaps, a great one.”

“The events of the year 1920 cast a long shadow,” Charlwood concludes. They did indeed. But the events of 1920 flowed from the Great War. The American diplomat and historian George F. Kennan called the First World War the “seminal catastrophe” of the 20th century. Reflecting on the causes of the subsequent wars and crises of that bloody century, Kennan wrote that all the lines of inquiry led back to World War I.

War breeds revolution and rebellion, which results in more fighting and struggles for power. Kennan and other realists were and are rightly skeptical of dreams of new world orders and everlasting peace. History is a better guide to human affairs than dreams.