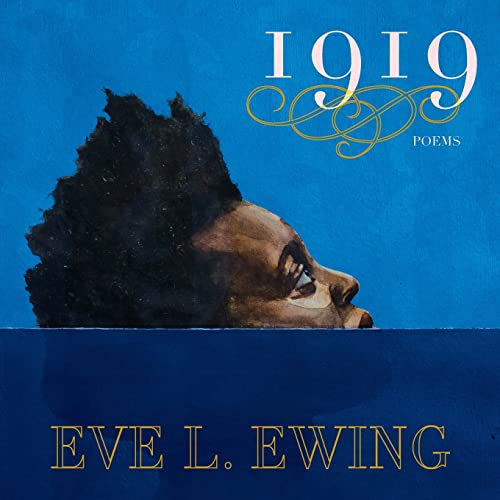 “Eve L. Ewing has achieved what the historian cannot. She has restored the blood and sweat to the historical record of a tragic moment in the history of the nation.”

1919 is one of those years that has become a marking point in American history. In the year after World War I, it seemed as if many fundamental changes were revealed. Some were related to and accelerated by the war; others were the result of accumulating forces coming to maturity. Changes embedded in the second half of the 19th century flowered into the national consciousness as the decade of the twenties approached.

The world order had changed, and the United States came out of the war the single most dominant nation in world. Its economic strength was formidable, although it was not yet ready to flex its muscles on the world stage. While the dollar marched across the globe, most Americans turned their focus inward, rejecting membership in the League of Nations and celebrating what Warren Harding termed a return to “normalcy.”

In the troubled world of race in America, while demographic changes accelerated, “normalcy” could be a reactionary concept. The Great Migration of the African American population out of the rural South and into the urban North and West produced a new stage for racial conflict in America. A number of cities were heavily impacted by this exodus as African Americans faced discrimination and segregated and overcrowded housing. Many in the white population feared an invasion by what they regarded as an “inferior” people.

This pattern of migration affected any number of cities across the nation, and in many of them, race riots broke out in the heat of the summer of 1919 amid the search for “normalcy.”

One of the bloodiest of these riots took place in Chicago. It began at a segregated Lake Michigan beach when a young black boy strayed into the segregated waters of the white beach. He was pelted with rocks by white beach goers who shouted for him to move out of the white area. The young boy drowned after he was either hit by the rocks or was exhausted from the experience. Within a few hours, this incident had exploded into a full-scale riot that lasted nearly two weeks. Twenty-three African Americans and 15 whites were killed. Hundreds of people were injured and thousands were left homeless.

Eve L. Ewing, author, poet, and a sociologist at the University of Chicago, seeking specific information on housing segregation in the city of Chicago for a recent book, consulted The Negro in Chicago: A Study of Race Relations and a Race Riot, a report prepared in 1922 by a committee appointed by the Governor of Illinois. The report pulled her in beyond the specific information she needed as she found herself fascinated by what the report revealed.

The power of the report triggered the poet in Eve Ewing, and the result is 1919. The majority of the poems are introduced by epigraphs taken from the report. In and of themselves, these are powerful, and it is easy to see how they inspired the poetry. Some of poems speak directly or indirectly to specific events during the riot. Others transcend time and place and find echoes in more recent realities in Chicago and the nation.

Not all of the pairings work, but most do. Many of the poems have great power, and some present searing images. Collectively, these poems present the history of a particular time and place in a form not customarily seen in historical prose.

It is difficult to take a small passage that serves as an adequate example of Ewing’s poetic power, but perhaps the last few lines of a poem titled, “The Train Speaks” gives a hint of that power. The poem is introduced with this short quote from the report: “. . . the presence of Negroes in large numbers in our great cities is not a menace in itself.”

They know not the men who are waiting

and angry. They know not that the absence

of signs does not portend the absence of danger.

My children. My precious ones.

I can never take you home. You have none.

And so you go, out into the wind

These poems offer testimony to the fact that history need not be left to the historian and that literature can convey history with an emotional power that enhances and drives home the historical record. Historians are limited by the verifiable information they uncover and their professional requirements of objectivity. Poets are free to convey mood and emotion delivered by the power of their choices and arrangement of words.

Eve L. Ewing has achieved what the historian cannot. She has restored the blood and sweat to the historical record of a tragic moment in the history of the nation.