1619: Jamestown and the Forging of American Democracy 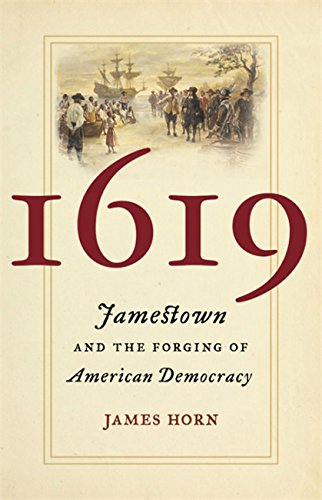 "The beginnings of class warfare, democracy, individual liberty, local government, racism, and American slavery had beginnings for what would become the United States in Jamestown in 1619. These powerful elements took different tracts in the generations that followed but always while intertwined."

James Horn, president of the Jamestown Rediscovery Foundation, covers struggles in Jamestown after it became the first permanent English settlement in the New World. 1619: Jamestown and the Forging of American Democracy covers much, some not reflected in the title, but that had profound effects on American history.

The author writes "Jamestown was unashamedly a commercial venture." Long before Adam Smith, leaders of the 17th century understood the economic power of trade. Jamestown "came out of an era of private English and Scottish overseas economic ventures," many of which in America had proven failures, notably the "Lost Colony" of Roanoke in 1585.

Jamestown would lessen "England's dependence on imports from Europe and elsewhere." "It was a means of addressing intractable social problems at home and an opportunity to extend the realm overseas." "Virginia offered an opportunity to escape the vicious cycle of overpopulation and unemployment that had stunted the lives of English poor and lower-middling working people."

From the beginning, the sponsoring Virginia Company "recruited skilled artisans from England and overseas" including "the best possible workers" from craftsmen in France, Germany, Italy, and Poland. It also sought "to convert the Powhatans [Virginia's Native American peoples] to Christianity and English ways." It never intended for the enslavement of anyone.

Abandonment, dissension, famine, and trouble with the Indians became so bad that the Virginia Company threatened anyone returning from Jamestown who denounced it "would be sent back to the colony immediately as punishment." From 1610 on, Jamestown had permanency and by 1619 prospered from the production of tobacco, not from finding treasure or "a passage to the Pacific Ocean."

From its beginnings, Jamestown had some form of local government although threats and troubles led to mutinies. It and the satellite settlements came "to be ruled by military laws as well as strict religious principles." Its leaders even demanded church attendance twice each day.

Necessity during the near extinction of the colony from hunger and siege led Governor Thomas Dale to begin the policy of allowing settlers their own lands, livestock, and profit so that it then "quickly became self-sufficient." Expanding the private land policy attracted investors and settlers on a correspondingly giant scale.

The Company's Sir Edwin Sandys foresaw these beginnings as important. He envisioned "a new type of society [founded] in Virginia built on good [local representative] government, just laws, Protestant morality, and rewards for everyone who invested or settled in the colony." These ideas became the ideals of the later United States.

Just as Virginia prepared to change history with its new born assembly, the English privateer (a government approved pirate ship) White Lion, posing as Dutch, arrived in Virginia with a cargo of African slaves taken from a Portuguese ship. Spain "refused to recognize the legitimacy of foreign colonies or allow foreign merchants to traffic in America" making such means the only access to African slaves in English America.

Sandys opposed but the powerful Earl of Warwick supported using Bermuda and Virginia as bases for privateering. More ships with more slaves followed. "From the outset ownership of Africans was dominated by wealthy settlers who controlled large plantations, held important official positions, and acquired the majority of captives . . . and held on to them."

Horn describes in detail from where in Africa these first slaves came, how they found themselves in Virginia, and what became of them. He explains the debate on "did de facto enslavement of Africans begin in 1619?" "The remarkable story of those Africans who against all odds escaped bondage and established themselves as free planters" supports or denies racist bondage as existing from 1619 on, depending on one's view.

The great Indian attacks of 1622 led to the enslavement of the Indians. It also proved the final undoing of the Virginia Company and started the debate as to whether English America should have rule by the Crown or its own settlers.

The elites would dominate Virginia and "the majority of Virginia's population—poor tenant farmers, white servants, and enslaved Africans—found themselves mired in deep-rooted poverty." "Poverty and inequality were worsened immeasurably by the evolution of slavery and racial prejudice" to the present day.

The beginnings of class warfare, democracy, individual liberty, local government, racism, and American slavery had beginnings for what would become the United States in Jamestown in 1619. These powerful elements took different tracts in the generations that followed but always while intertwined.

This simple entertaining text in 1619 makes for a short fast entertaining read. Too often, writers dismiss the story of Jamestown in a few sentences, but here the author tells the forgotten causes of its achievements and failures but also the too often overlooked consequences. Horn includes useful maps and some illustrations.