13 Ways of Looking at a Fat Girl 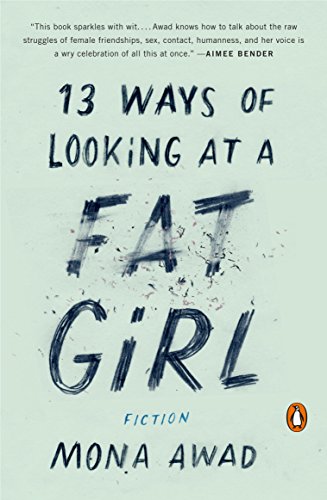 The woman at the center of Mona Awad’s novel 13 Ways of Looking at a Fat Girl has a problem, and because even the word is so loaded within the context of this book, one hesitates to call it big.

Elizabeth’s problem is her weight and body image that causes her to literally rename herself depending on what the scale is telling her. Beth, Lizzie, Liz, Elizabeth—even her husband has a hard time remembering her name of choice on any particular day.

This novel is told in vignettes from the time Elizabeth is a teenager to when she becomes a divorcee. Throughout, the one constant is her self-loathing because of her weight and what she perceives is society’s reaction to it.

The sheer insanity of Elizabeth’s obsession reaches a height in the chapter titled “The von Furstenberg and I.” In it, Elizabeth, whose weight fluctuates like the weather, finds herself in a dressing room trying to fit into a von Furstenberg dress that is clearly too small for her. But getting that dress over her head becomes a battle of wills between Elizabeth and the saleswoman. Ultimately Elizabeth is left half in and half out of the dress and worries that the saleswoman will take matters into her own hands.

“I have the terrible image of her coming in here with the jaws of life tucked under her arm. Ash blond tendrils escaping from her chignon as she attempts to wrench me out of the von Furstenberg.”

Elizabeth forces her body a bit farther into the dress until it tears. Now she doesn’t ever want to leave the dressing room—ever.

“As I sit here, I can already freel myself oozing out of the von Furstenberg. Oozing from the V in front and the V in the back, the volume of my ass threatening to crack the little bows along the fault line. And I begin to think maybe this is it. Maybe this is the only way out. First the fat, then maybe we’ll find a way to coax out the organs . . .”

Depending on your viewpoint, such passages can be funny or horrifying. Clearly, Awad—a wonderful writer--is making some very pointed arguments about our body-obsessed culture where fat is the enemy, something to be ridiculed and mocked. Her husband’s friend, for instance, constantly talks about his girlfriend who is so fat, she’ll do “anything.” The friend suggests passing his fat girlfriend around his friends so they can see for themselves, and one night, when Elizabeth’s husband has had one too many Fat Tire beers, he seriously thinks about taking his friend up on his offer.

Eventually, Elizabeth loses weight and slips into tighter and tighter dresses that she wears for every occasion no matter how inappropriate. But behind closed doors, she’s still ashamed of her body—her shrunken breasts and sagging skin—that she no longer wants sex, and her husband, longing for the old days, turns to fat girl pornography. He wants the overweight, more interesting girl he fell in love with, but Elizabeth is blind to that.

It’s only later after a divorce that Elizabeth seems to find a measure of peace, eating whatever she wants and checking out of her daily running-to-nowhere exercise regime. She’s not happy, merely content.