1,227 Quite Interesting Facts to Blow Your Socks Off 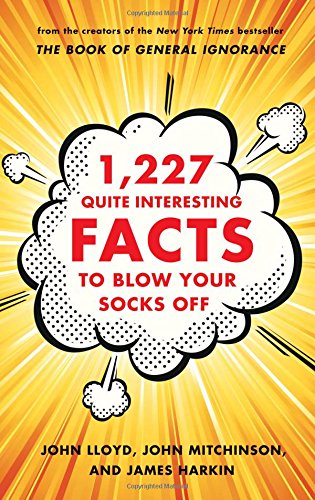 “Unmitigated seriousness has no place in human affairs.”

1,227 Quite Interesting Facts to Blow Your Socks Off is a book reviewer’s nightmare. With no real structure apart from an index “to help you find your favourite bits,” it’s just a string of odd information—not so much a book as an extended list.

But what an entertaining one.

Put together by John Lloyd, the creator of comedy television quiz show QI; John Mitchinson, the program’s director of research; and James Harkin, the senior researcher, the book’s disparate, seemingly random contents elicit plenty of laughs—and no wonder; these men have made careers out of finding largely nonsensical but wholly true facts with which to entertain and delight.

As they say in the introduction to their 1,227 fascinating facts: “Here, in bite-sized pieces, nestling among the known and the numbered, are the mysteries of the enormous and the minuscule; of human comedy and tragedy; of heat, light, speed, life, art, and thought.”

There’s nothing to analyze in the way the book is put together, and not much to say, either, except to reproduce a few of the hundreds of nuggets of information.

Bet you didn’t know, for example, that 10% of all the photographs in the world were taken in the last 12 months; in Switzerland it is illegal to keep just one guinea pig; Depp means “twit” in German; a single bolt of lightning contains enough energy to cook 100,000 pieces of toast; in the 19th century sausages were marketed as “bags of mystery,” and in 2010, Ghana banned the sale of secondhand underpants.

Which all goes to prove what coauthor John Lloyd (along with classical Greek philosopher Plato) believes: Unmitigated seriousness has no place in human affairs.