101 Thai Dishes You Need to Cook Before You Die: The Essential Recipes, Techniques and Ingredients of Thailand 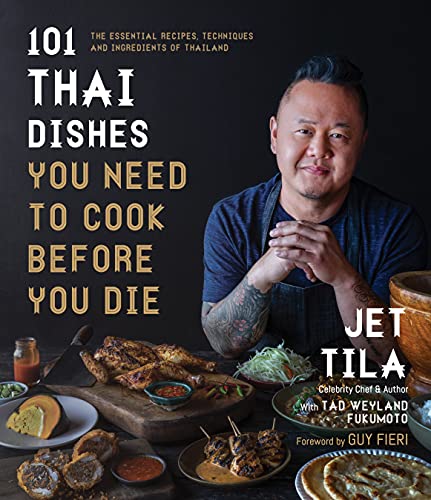 What an appealing visage Jet Tila has! His photo on the book cover is as inviting as the food depicted   the title. Everyone loves Thai food, but very few of us have been to Thailand, so an introduction such as Tila’s is the next best thing. He says right in his introduction that he loves “teaching more than anything.” He’s a great chef, too, but this love of teaching is probably more important for a Thai cookbook for Americans. He is true to his title: This is not the end-all of Thai cookbooks, but it’s the best how-to-get-started with Thai cooking.

In the beginning chapter “Pantry Breakdown” he recommends “taking the extra effort to track down the right ingredients via the internet or chasing them down in a local Asian market.” This is the most important advice in the book. The reader must read this chapter before proceeding. Why? Although Tila doesn’t say it, it’s the difference between producing an Americanized Thai dish that has no resemblance to true Thai flavors to getting as close as possible to what you would eat in Bangkok. He also, thankfully, sets us straight about the much maligned msg (monosodium glutamate) used in Asian cooking.

For an American cooking authentic Thai food there is BGT and AGT: before going Thailand and after going to Thailand. After a stay in Thailand, eating all that fabulous street food and regional varieties away from the tourist centers one returns to realize “I’ve never had real Thai food in America.” That’s right because most of the Thai restaurants cater to Americans. There are several authentic Thai restaurants in places that have sizable Thai communities, such as Los Angeles, where Tila hails from.

Tila doesn’t say it outright, but those commercially made jars of Thai chile (or curry) paste usually red or green found in the Asian section of supermarkets, are inferior to homemade. Tila provides a section for homemade curry paste recipes, and I guess he doesn’t emphasize their importance because he doesn’t want to intimidate the reader. That’s the teacher showing.

Thai cuisine has great depth and complexity so when one decides to choose 101 recipes, that must have been difficult. Let me amend what I said earlier: This book is not an introduction to Thai cuisine. It is, rather, a kind of cooking equivalent to painting by numbers, not meant pejoratively. Eighty-five million Thai contribute to a highly adaptable, evolving culinary culture a thousand years old, so Tila simply is not going to be able to capture that in 101 recipes. Many of the recipes he has chosen will be familiar to the American restaurant goer. At least now you can try it at home. A dish like pad Thai is included probably because it is the best-known Thai dish in America. Ironically, in Thailand cooks will tell you it’s not a Thai dish, and they barely take note of it. Perhaps it’s considered corny, like fettuccine alfredo is to an Italian.

A reader who has spent time in Thailand will be frustrated with the book because most of the recipes here one would call home cooking recipes, while the typical traveler in Thailand will have experienced a different type of cooking. A traveler barely gets past the extraordinary street food, which is very different. Tila knows all this because he keeps alluding to it. For instance, he tells us that “Thais are notorious grazers and don’t eat one long multicourse meal.” One street food he happily includes is kai jiao or Thai omelet. Learn how to make this rather than pad Thai.

Tila is right: These are 101 dishes you should make before you die. However, some like the simple in concept khao man gai (Hainan Chicken Rice) does require paying attention as it can be tricky. In Thailand, som tum Thai (papaya salad) is ubiquitous—every one of every class make it. You may be tempted upon the completion of the first successful recipe to keep making it over and over again in which case you may never reach the 101st recipe.

There is one chapter that must have been written strictly for Americans, and that’s the one titled “Plant-based Thai.” This vegan chapter is a nod to its American roots as no one in Thailand would call themselves vegetarians let alone vegan. Why would they? Thai cuisine is so heavily vegetable-based anyway.

There are two recipes near the end of the book that should not be overlooked. Thai Iced Tea and Thai Iced Coffee. You’re kidding, you say, what’s so special? Trust us—these are incredible—or at least they were in Bangkok.

The photographs are beautiful enhancements to the book and inviting as well. You will be happy to have this non-intimidating and welcoming invitation to cook Thai food for your library and in your kitchen.