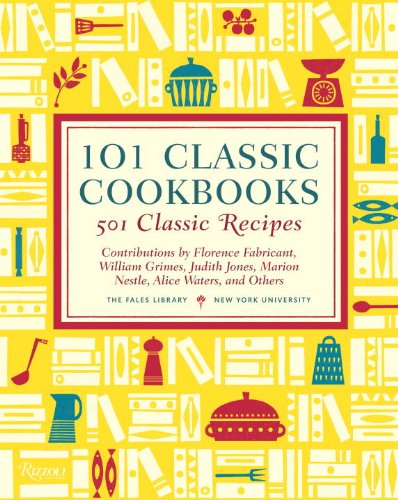 “. . . will remind longtime cooks why learning about cooking satisfies their souls, and give every cook . . . many reasons to hit the kitchen.”

A great cookbook and one you argue your way through: For opinionated cooks, 101 Classic Cookbooks provides pure joy.

Any “best of” list can make for endless debates, and this compilation, which tells the history of American cooking through vignettes about each cookbook, will keep its readers talking back.

For example, cooks of more recent vintage, who can’t recall a time when they actually had to learn how to use a food processor, may be stumped—and amused—by the inclusion of Abby Mandel’s Cuisinart Classroom from 1980. But like many of the cookbooks in this tome, it will remind readers of a major leap in America’s culinary history—along with how much knowledge there is to lose along the way, as in the processor recipe for banana bread. For all the ways we use food processors today, few recipes call for banana bread to be made, start to finish, in one.

Still, should this count as a “classic” cookbook? The vignettes about each of the 101 books, chosen from the enormous Fales Library Food Studies collection at New York University, attempt to justify each book’s inclusion, and generally succeed . . . at least until you study the fascinating list of the 200-plus books first under consideration and start arguing all over again. (Although unmentioned in the title, the choices stick to cookbooks of the 20th century—stretching the definition slightly to begin with Fannie Farmer’s Boston Cooking-School Cook Book, published in 1896, and ending with The French Laundry Cookbook in 1999.)

The chronological first section offers the cookbook vignettes, with photos of and from each. Some of these will leave readers wanting more, especially about the earlier cooks and books, but this walk through the 1900s spices its history with several essays from food writers on some of the most influential cookbook authors.

Many are obvious choices (Judith Jones on Julia Child, Scott Peacock on Edna Lewis), but what a delight to get two full pages from Jessica Harris on Rufus Estes, the African-American author of the self-published Good Things to Eat, as Suggested by Rufus. Learning about the life of this man, a freed slave who went on to become one of the top chefs with the Pullman company, serving two presidents and the princess of Spain, is a highlight of this book. As is an essay by cookbook collector Dalia Carmel Goldstein about how she discovered the precious (in its truest sense) notebook of recipes written in the Theresienstadt concentration camp. Such essays alone make the book worth its $50 tag.

So many of the cookbooks included here bring back fond memories of relatives’ cookbook shelves, and many remain in use today: the original Joy of Cooking, of course; Charleston Receipts; Elizabeth David’s French Provincial Cooking; the Time-Life Foods of the World series; Craig Claiborne and Virginia Lee’s The Chinese Cookbook; Maida Heatter’s Book of Great Desserts; Simple French Food from Richard Olney; The Silver Palate Cookbook; The Italian Baker from Carol Field; Marion Cunningham’s The Breakfast Book; and Richard Sax’s Classic Home Desserts.

More of the choices from the waning years of the century, though terrific books, seem to pale in comparison to their long-ago ancestors. Partly that’s nostalgia speaking, but the earlier books speak with a charm and quirkiness we rarely see anymore (and when we do, it feels precious in its worst sense).

The original Joy of Cooking, for example, may have been a bit of a mess, but its charms and author’s personality shine through. And though the Times-Picayune of today may be a sad shadow of a newspaper, its 1901 owners had the foresight to preserve, in an authoritative yet still-familiar voice, so many flavors and stories of New Orleans in The Original Picayune Creole Cook Book.

Recipes are printed verbatim, with headnotes intact, retaining their authenticity, even if this means most readers may skip many of the early books’ recipes. For example, true to its day, a recipe for jelly pie from The National Cook Book of 1932 leaves the bottom crust off the list of ingredients, and provides no instructions on baking temperature or time.

(Pity poor Lulu Hunt Peters: Her Diet and Health with Key to the Calories, complete with charming illustrations by her 10-year-old nephew showing how to exercise—“Important! Keep Facial Expression Throughout as per Artist’s Idea”—apparently so repulsed the 101 Classic Cookbooks editors that none of the “notable recipes” mentioned in its vignette get reprinted in the recipe section. Though she commanded anything but pity in her day: Ms. Peters published her book, left to work with the Red Cross in Bosnia in World War I, and returned to find, to her great surprise, that she had an 800,000-copy bestseller on her hands.)

Looking through the recipe choices will give readers yet more room for argument (two nearly identical recipes for banana bread?), along with many temptations. Although some seem picked solely for curiosity’s sake (are you likely to make roast possum anytime soon?), others are old favorites waiting to be cooked again.

One frustration: Many recipes refer to others in their original cookbooks, but those are not reprinted here. In many cases, resourceful cooks shouldn’t have much trouble filling in the gaps with recipes from their own books or an Internet search—and clearly something had to be left out of a book approaching 700 pages.

This is a serious cookbook—serious in heft and content—but never boring or ponderous, and blessedly “yummy”-free. It will remind longtime cooks why learning about cooking satisfies their souls, and give every cook, new and experienced, many reasons to hit the kitchen.