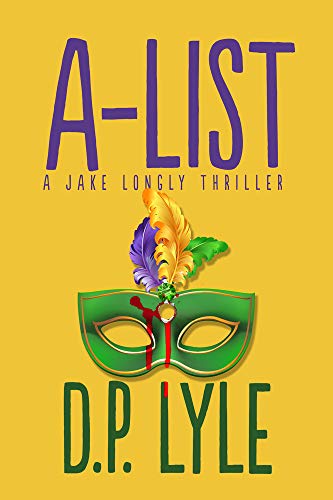 “D. P. Lyle knows how to keep the narrative flowing at a rapid pace and keep the questions coming.”

A-List by D.P. Lyle, the second book in the Jake Longly series, blends humor with hard-boiled detective fiction to create a fast-paced, entertaining novel that will satisfy fans of the genre.

It is never good news for a producer when his A-List actor, star of a billion dollar movie franchise, wakes up to find a dead body in his bed and no memory of what happened. Fortunately producer Charles Balfour’s niece, Nicole Jamison and her partner Jake Longly have connections.

Nicole still has her PI license and technically still works with Longly Investigations, so who better to save her uncle’s franchise film empire by finding the real murderer of young Kristi Guidry, thus getting his A-List actor, Kirk Ford out of jail and off the hook? Time is money in the movie industry, and Uncle Charles needs Kirk back on the set ASAP.

Nicole and Jake have a conflab with Ray Longly, owner of Longly Investigations and Jake’s father, who asks if Kirk Ford is in the habit of picking up local girls while on location.

Nicole is honest about Kirk’s proclivities. “He screws around, no doubt there, but he’s not malicious about it.” Meaning the actor doesn’t make a habit of strangling his girlfriends.

Ray agrees to take the case, particularly when he learns Uncle Charles will pay triple his agency’s usual fees. “I like the sound of that,” he tells Nicole. Like the film industry, Longly Investigations relies on a decent cash flow.

Jake and Nicole drive to New Orleans at just under warp speed where the film company is on location. “In rapid succession, she dropped a Corvette, a Lexus, and a jacked-up SUV in her wake.”

In New Orleans, the Big Easy, they check into the Montelcone and meet with Marty Ebersole, the film’s director, for the lowdown on Kirk’s close encounter with a dead girlfriend in a locked room. The police found two wine bottles, three joints, one half-smoked, used condoms, and Kristi Guidry strangled with her own bra.

To make matters even more dicey, Ray and his sidekick Pancake learn that Kristi is only 19 and her uncle. Tony Guidry, is the baddest dude in the Big Easy. Ton is alleged to have a controlling interest in prostitution, drugs, fraud, probable murders, and with bought-and-paid-for city officials, including the police, the medical examiner’s office, and a certain Assistant District Attorney, Melissa Mooring, who is handling the prosecution.

Kristi also had two brothers, Robert and Kevin, both big, look meaner than they are, and if not dumber than a post, close to it. While Kristi is—or was—Tony’s favorite person in the world, he merely tolerates the two brothers.

Kirk receives bail, much to the relief of Uncle Charles and Ebersole, so filming can continue on the sixth of the Space Quest movies. However, the little problem of how someone else can have entered a locked hotel room, strangled Kristie, and left without Kirk knowing still needs to be solved.

The twins, Tara and Tegan James, Kirk’s twin sidekicks in the Space Quest series are adamant that Kirk is innocent. “No way,” they said in unison.” The twins also say that “Kristi being around for a whole week meant he totally liked her.”

If Kirk really liked Kristi, then why would he kill her? When ketamine is found in both Kirk’s and Kristie’s blood, as well as in the half-smoked joint from the hotel, but not in the other two, the question becomes where had the joint come from. Kirk says Kristi brought it, and neither of them knew there was ketamine in it. The ketamine does provide a defense of diminished responsibility for Kirk—if he is guilty.

Kristi’s Uncle Tony learns of the ketamine from his source in the medical examiner’s office, and is incensed. He sees it as a way for Kirk to escape a murder charge. If Kirk doesn’t go down for Kristi’s murder, Uncle Tony has other means of seeing the actor punished.

New questions arise almost daily. The hotel’s computer shows that Kirk’s key card was used at about the time of the murder, but there was only one key card to the room, and it was found by the police exactly where Kirk says he always put it. Who used the key card? Was it Kirk? Or Kristi?

All of Kristi’s friends say that she was sweet, innocent, and had no enemies. Is Kirk really the target of the murder: drug me, kill Kristi, and frame him? But who hates Kirk enough to put him at risk of the death penalty?

D. P. Lyle knows how to keep the narrative flowing at a rapid pace and keep the questions coming. He also demonstrates to those in doubt that humor can have a place in noir fiction. Jake is a likeable wise ass who keeps the really nasty scenes from becoming too sickening. An example is Uncle Tony’s body disposal method.

The discerning fan may solve the who, how, and why more quickly than the author might wish, but still will read to the end of the book just in case. Given all the misdirection in the story, even those careful reads can always be wrong.