I Know My Name: A Stunning Psychological Thriller 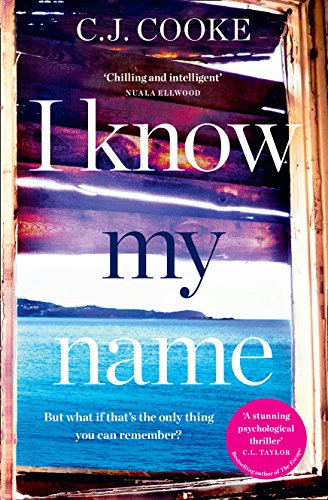 A missing wife, a frantic husband, a suppressed past, an uninhabited island in the middle of the Aegean Sea, and four strangers are plot lines that weave together in a debut thriller deserving of any number of descriptive phases common to the genre: unbearable suspense, spine-tingling, tension-filled, terrifying, shocking and totally unexpected ending.

I Know My Name by C. J. Cooke is a mystery, a thriller, a suspense novel, however one wants to slice the genre. Actually, it is all of those and more. Cooke misleads her readers as successfully as Agatha Christie; creates an eerie setting and threatening characters on a par with any contemporary thriller writer; and ratchets up the level of suspense to the point a reader is tempted to skip to the end just to relieve the tension.

An unknown woman washes up on the beach of an uninhabited Greek island. She is rescued by the four friends who are on a writing retreat on the island. As she sits in the warm kitchen of a farmhouse on the island, the four strangers, Joe, Hazel, George, and Sariah, her rescuers, ask for information.

“It’s ridiculous, but I can’t even call it to mind. Why can’t I remember it” I try to think of faces of my family, people I love—but there’s a complete blankness in whatever part of my brain holds that information.”

In other words, she cannot remember her name, her address, schools she might have attended, her marital status, why she was sailing by herself in the Aegean Sea. She has no passport, no wallet, no money, no credit cards, no cell phone—nothing but her clothes and a life jacket. She is truly unknown and unknowable.

If the woman is a mystery, so are the four strangers. Sariah, the older of the two women, is a natural caregiver. It is Sariah who provides calm among the four people.

Hazel, the other and much younger woman, is rather immature, nearly childish, and asks uncomfortable questions such as whether the rescued woman really can’t remember her name. “So, if you can’t remember your name, how come you can remember how to talk?”

Joe, a young, gangly young man who claims to be an aspiring poet, is the one among the four who gives first aid to the group. When the rescued woman reads one of Joe’s poems she is certain she has read it before. But where? Why does Joe seem familiar?

George is the oldest of the four would-be writers. He is in his forties, large and intimidating, but seems to be the only one besides Joe and his few poems, who does any writing, or it seems. At least, he disappears every day, claiming he’s going to his private place to work on his novel.

The woman learns that the situation is dire. The storm that wrecked her boat and cast her upon the beach also broke the mooring of the strangers’ boat. There is no way off the island until the landlord of the farmhouse, a man named Nikodemos, brings supplies by boat once a week. George also has a satellite phone, buts seems unable to actually summon any help.

When the woman awakes in the drab little attic bedroom of the farmhouse, she gazes at herself in a mirror. “Why don’t I recognize myself? Why isn’t my body familiar? Where do I live? Do I work? Do I have kids? The white space in my mind is luminous, unyielding.”

More than a thousand miles away, in suburb of London, Lochlan Shelley sits in his home in a panic. His wife Eloise, mother of four-year-old Max and infant Cressida, is missing. She disappeared with no wallet, no money, no keys, no cell phone, no purse, and leaving her two small children alone. Eloise loved her children more than anyone. She would not voluntarily vanish. But Lochlan has doubts.

When the police discover that someone has hacked into the baby monitors that are in Max’s and Cressida’s rooms, as well as other places, Lochlan is even more terrified. Who would be stalking Eloise and why?

The stalker is Harriet, a colleague of Lochlan’s with whom he once tottered on the edge of having an affair. He denies how close he came to infidelity, but is caught in a lie by police. This makes them suspicious of his involvement in Eloise’s disappearance.

Gerda, Lochlan’s grandmother-in-law from hell, doesn’t like her granddaughter’s husband anyway, and information about a possible affair condemns him in her eyes. Only when Gerda searches Eloise’s office at the charity the young woman runs are horrifying secrets revealed that change how both Gerda and Lochlan view Eloise.

Back on the island the mystery woman prepares to leave the island when Nikodemos brings supplies. Joe gives her a notebook in which he reveals her name: Eloise Beatrice Shelley. She is Eloise. But does Joe know that?

Nikodemos doesn’t arrive, and George begins to terrorize the others on the island. He tells Eloise that she can’t leave the island until “she remembers.”

In n conclusion that will shock readers, Cooke provides an ending that no one will foresee. Wonderful writing that occasionally approaches brilliance lifts this novel above other titles in the genre. Hollywood should option this book for film. Properly directed, I Know My Name should be a blockbuster.