Zora and Langston: A Story of Friendship and Betrayal 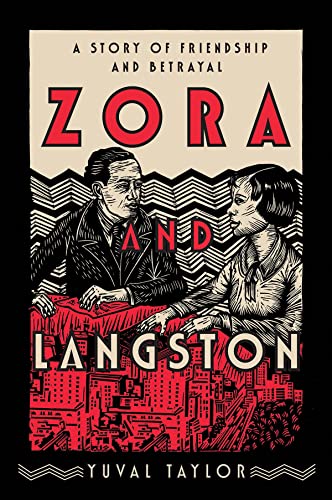 “Yuval Taylor’s love telling tale is intriguing, funny, and filled with much speculation. It’s a book that might be ready for the big screen. The lives of Hurston and Hughes continue to be fabulous and exciting.”

Some book covers and titles are similar to movie trailers. They attract you like popcorn and sweets in the theater lobby. Zora and Langston: A Story of Friendship and Betrayal fits that description. Another book about Langston Hughes, Zora Neale Hurston, and the Harlem Renaissance is much like watching the film Casablanca again. One knows the ending but is always happy just waiting for it.

Yuval Taylor’s Zora and Langston is much like an old map trying to find a new world. It begins with things many readers might already know about the two writers. Zora Neale Hurston, folklorist and author, is best known for her classic romantic novel Their Eyes Were Watching God. Rumors still circulate that some black women separated from their lovers when they discovered their partners hadn’t read Hurston’s book.

Langston Hughes is the African American writer whose complete body of work helps to define and explain the black experience in the United States with all its complexity. His cultural fingerprints seem to be everywhere. Both Hurston and Hughes were key participants in the period known in American history as the Harlem Renaissance or New Negro Movement. Both captured the youthful vitality of the Roaring Twenties.

Taylor’s book explores the “music” made between Hurston and Hughes. How did a wonderful friendship collapse soon after the crash of the stock market? How did fun loving friends divorce themselves into sadness? Taylor’s book is an attempt to explore their relationship in length and depth. He draws upon unpublished papers and interviews. A considerable amount of his writing is dependent on books already written. This at times creates a borrowed term paper or thesis quality to Zora and Langston. Taylor’s writing is still enjoyable and people new to the careers of the two African American writers will feel comfortable and curious about all the fuss and the cause of betrayal. Taylor writes:

“Most of Langston’s letters to Zora are lost, so it can appear that Langston never admitted how valuable their friendship had been for him.”

Zora and Langston is not a book noir. Instead it’s a case of misunderstanding around a literary collaboration. The play Mule Bone was the bone of contention between the two writers. In the summer of 1926 they had planned their first collaboration, an opera based on black popular music and drawing upon their knowledge of Southern folklore. Unfortunately not much came of the effort except perhaps a seed being planted for Mule Bone.

Zora and Langston provides a comprehensive overview of the literary disagreement that over the years puzzled scholars. Chapters 8–9 takes one from the spring of 1930 to the winter of 1931. This is where one will find the “fresh produce” in the book.

Taylor writes about the roles patron Charlotte Masson and fellow writer Louise Thompson played in the death of the H & H friendship. There are morsels of gossip in these two chapters. Was there a love triangle between Hurston, Hughes, and Thompson? Was that the reason behind the conflict over Mule Bone all these years? Yuval Taylor writes like a tabloid journalist:

“And one night while they were both in the only bed in Zora’s room, Zora asked Louise if she was interested in homosexuality. Louise didn’t sleep the entire night. Is it possible that Zora fell in love with Louise during those long days and nights working, talking and sleeping together? The outsize role that Louise Thompson would come to play in the breakup of Zora and Langston’s friendship might indicate that Zora’s jealousy might not have been caused as much as Langston favoring Louise as Louise favoring Langston. Whether Zora had homosexual desires is a complicated question.”

If a reader is not careful one can easily be seduced by the personalities found in Zora and Langston. The issues however around Mule Bone are very serious ones. Central to the discussion is the artistic ownership over one’s work. Who gets credit when there is a collaboration? Another concern is accurate black representation when writing for the stage. How Hughes and Hurston attempted to interpret African American folklore is important for future writers.

Yuval Taylor’s love telling tale is intriguing, funny, and filled with much speculation. It’s a book that might be ready for the big screen. The lives of Hurston and Hughes continue to be fabulous and exciting.