The Zero and the One: A Novel 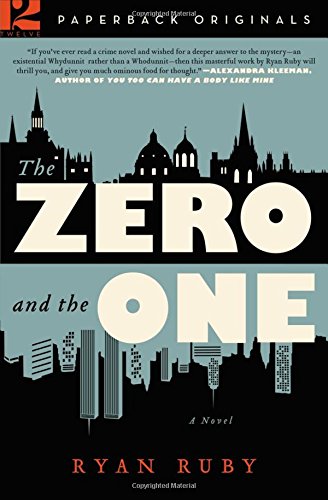 The story opens with one of the two main characters deceased and the other preparing to attend his funeral.

In flashback sequences while he goes through the motions of mourning, Owen Whiting wonders how much he dares tell his friend Zachary’s family—his parents and his twin sister—of the role he had in his friend’s death, for which he is actually, if not morally, responsible.

“I can’t tell them everything obviously . . . my loneliness before I met him. Nor the black eye he got at the Cowley Arms. His experiment in petty theft. How much we drank or the drugs we did. The whore we fucked. My aim was to cast Zach in a flattering light rather than to illuminate his character.”

Zachary Foedern has committed suicide but his death is more than that, for Owen was the second barely-willing participant in a pact as well as its final cause. The way it came about is revealed through his mental reminiscences as he participates in the rituals of grief and prepares to return home.

Owen and Zach met at Pembroke College, a very small Oxford College, one a student admitted on a “hardship grant,” the other an American “visiting student.” Charismatic and iconoclastic, Zach choses Owen to be his friend, companion, and confidant.

“‘Because you are special.’”

Fascinated, perhaps obsessed by The Zero and the One, a novel written by an obscure German philosopher, Zach seeks out a copy of the rare volume, and through it, reveals his plan to Owen.

“‘I’ve decided to end my life . . . and I was hoping you’d come with me.’ He said it casually as if inviting me to the pub for the evening, rather than to nothingness for all eternity.”

As usual, Owen goes along with whatever Zach suggests, committing the sin of agreement by his omission of protest . . . perhaps not believing what he intends, maybe thinking it’s another of his friend’s ways of thumbing his nose at conventional social mores. All he knows for certain is that after Zach returns from winter break in the States, his attitude changes, becoming even darker than usual.

The reason behind Zach’s behavior is fully revealed to Owen during the funeral, when he meets Vera, Zach’s twin sister, “a central piece of the puzzle Zach’s life had made of my own.”

It is through Vera he learns the extent of Zach’s obsession with self-annihilation, her place in her brother’s life—as the other part of a single person cleaved in half—as well as Zach’s role in committing a crime more heinous than self-death.

“Zach’s death is a virus, a contagion. His madness infects everything he touched, moving outward, one ripple at a time . . .”

In an all too shocking dénouement, he realizes that even deceased, Zach manages, through Owen, the one who should’ve gone with him, to retain his hold on both his sister and his friend, and bring about the end he wished for them all.

“Death and Birth, Nothingness and Being, the Zero and the One. The same things . . . only different.”

Some novels give the reader the intense feeling they shouldn’t be read; that to do so is an intrusion into private thoughts and hidden feelings which must never be shared. There are other stories the reader will wish he hadn’t read . . . because they stay with us and haunt us long after the last page is turned and the book returned to the shelf.

The Zero and the One is one of those tales.

There may be some confusion in the switching from first person present to first person past, occasionally with no quotations around dialogue, and alternation of chapters between present events and flashbacks. The use of quotations and their definitions as chapter headings, as well as the philosophical discussions between characters could possibly turn away some readers, causing them to skip entire passages. That fact notwithstanding, this narrative closely entwines past and present, doling out the facts in enticing and maddening little bits for the reader to sort and align as they explain why events happened as they did.

In a violent burst of elucidation, even the smallest of Zach’s actions and intents become clear . . . much to the surviving characters’ regret.

Ryan Ruby has written a novel whose theme as well as the questions it poses will remain long after the last word is read. Whether a narrative of exaggerated adolescent angst brought to a tragic conclusion, a fable of the dangers of a friendship’s power, a warning against the threat of abstract ideas, or simply a novel of selfish obsession, its haunting elegaic passages leave only one question unanswered: Who was the Zero and who the One?