Zelda, The Queen of Paris: The True Story of The Luckiest Dog in The World 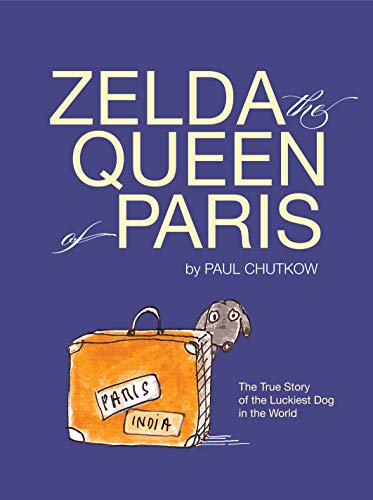 “[Paul Chutkow’s] story of Zelda is a modern day Pygmalion tale, in which Liza Doolittle in My Fair Lady, who was ostensibly the beneficiary of Professor Henry Higgins’s motivations, turns out to be Professor Higgins’ salvation. Similarly, though Paul Chutkow labels his Zelda as “the luckiest dog in the world,” many readers of his evocative, entertaining story would recognize that it is actually Paul Chutkow who is the luckiest guy in the world.”

Though Zelda, The Queen of Paris: The True Story of the Luckiest Dog in the World is nominally about a dog named Zelda, this book really is the place autobiography of journalist Paul Chutkow: tracing his path from Chicago, to New York, to New Delhi, to Paris, with side trips to Sardinia, and, ultimately, to the Napa Valley in Northern California.

At the time author Paul Chutkow named his dog Zelda, he had no idea that the dog might end up with him in Paris or how important the dog would be to him and his family. Given the dog Zelda’s personality, affinity for indulgence, plus her marginal self-discipline, the dog is aptly named after F. Scott Fitzgerald’s infamous wife, who was renowned for her larger than life persona.

While a student at John Hopkins University, Mr. Chutkow abandons an intended career in aerospace, aspiring to work for NASA, to enroll in the Writing Seminars major, which leads him to Paris, where he fantasizes he might one day live and write. The enduring appeal of Paris is exemplified by the extraordinary success of the Midnight in Paris movie, in which the character played by Owen Wilson aspires to live in Paris and write. While the Owen Wilson character’s dream of moving to Paris is, for a time, at least, frustrated by the outright rejection of the idea by his fiancé, and even by her parents as an appropriate place to live, Mr. Chutkow fortuitously is married to a woman, at least in the author’s telling of the story, who is open to his place choices—including Paris.

In time, the author’s Paris fantasy comes true—but not before an unhappy period in New York, divorce, and a transfer by his employer, The Associated Press, to India. His first night in India he meets the woman who soon would become his wife and co-conspirator in his nefarious adventures with Zelda—adventures that take them all the way across Europe, then across the Atlantic Ocean to North America, and eventually back to her own place, for before moving to India, she originally hailed from San Francisco.

The dog that becomes Zelda came into the author’s life as a stray street dog that frequented his home in New Delhi, begging his wife and their housekeeper to feed her. Seducing them to adopt her, Zelda devised and successfully implemented her place strategy to transition from mongrel street dog to the luxurious lap dog lifestyle that the author and his wife unwittingly afforded her.

Mr. Chutkow goes through no end of trouble and expense to rehabilitate the dog, especially after learning that because of her former life in the streets, she had numerous worms and parasites that needed to be eradicated. Indicative of his and his wife’s devotion to Zelda was that they cooked luxurious meals for her, prompting their housekeeper Sheela to observe, “You know, Memsahib, this dog eats better than most people in India.”

Zelda becomes so connected to Mr. Chutkow that on heavy news days requiring him to work extra long hours until midnight or even later, “Zelda would not touch her food until she had greeted me at the door and assured herself that I was OK. At first Eda and I dismissed this as just another of Zelda’s bizarre little quirks. But Sheela saw it in a very different light. ‘Indian wife,’ Sheela explained. ‘Never eat until husband home.’”

If Paris was Paul Chutkow’s fantasy place and Napa Valley was his correct place destiny, then India was the place that he needed to proceed through to get to that destination.

After spending several days interviewing Mother Teresa, who responds to his telling her that he hopes he will see her again one day: “Oh, you will, Paul. You definitely will”—a prophecy that proves prescient when, years later he meets her again while covering her acceptance of the Nobel Peace Prize—he has a life-changing epiphany, which comes to him in the company of Zelda:

“Late one night . . . I was sitting out on the front porch with my pal Zelda . . . in Mother’s world, I now could see there were no boundaries of nationality or creed, there were no differences of color or caste, there were no labels, no limits, no questions to answer . . . we were all in this together; we were all bound to one another by one powerful, invisible cord, a cord held by an invisible hand, a hand leading all of us forward with a meaning and purpose that we may never be lucky enough or wise enough to see or apprehend.”

Paul Chutkow never dreamed of moving to India, much less meeting the woman he would marry and the dog that would become his soulmate. Prior to leaving for India, he was advised by AP World Services head Stan Stinton, “India is going to shock you to the core. It is going to challenge every fiber of your being and every belief you have ever had about democracy and dictatorship, about what is moral and what is not. Just remember this, your job as a correspondent is not to judge; it is to understand.” Arguably, had he encountered Mother Teresa in another setting or without the prior exposure to India, he may not have been as receptive to the powerful lesson he derived from his time with her.

Whereas Mr. Chutkow was “drawn to journalism, to the systematic marshaling of facts, analyses, and differing points of view, applying calm, detached reason from a scientific perspectives.” He learned, however, that “India operates on a whole other plane.

“India is a land of mystery, a land of arcane gods and cults, of strange rituals and swarming emotions, a land where astrologers, fortune-tellers, palm readers and seers are never dismissed as crooks or shysters: instead they are embraced and consulted by the highest authorities in the land.”

Readers with strong connections to their pets will appreciate the author’s close bond with his dog. Such readers may even forgive the author’s self-delusion in describing a dog who misbehaves, both acting inappropriately and biting people, as a near paragon of dog goodliness. Consistently, Mr. Chutkow rationalizes Zelda’s bad behavior, evidencing his blind devotion to his dog, writing “there was nothing malicious about her outbursts . . . this was just Zelda being Zelda.”

In this regard, the dog seems to have been inspired by her namesake, for as the author writes, “In Paris, every once In awhile she had to cut loose and assert her independence, she had to thumb her nose at the proper manners and constrictions of bourgeois France and remember what it was like to be totally free.”

Zelda’s story and the author’s search for the right place conclude in Napa Valley. When on assignment to San Francisco, he is asked by a friend to look at a piece of property that she is considering purchasing. The assessment of his friend’s prospective purchase evolves into his own property prospecting.

Writing of his experience driving north on the Silverado Trail, the author relates, “the town of Napa slipped away and the landscape opened out onto acre upon acre of glorious vineyards . . . right away I could feel my spirits soar. In America, there are other drives that I adored, but for raw beauty I have found very few that could compare to the Silverado Trail. To me this was it: big sky, big landscapes, a perfect place to dream big dreams. And what a perfect place for a writer like me.”

Like Zelda, to whom he is devoted, Paul Chutkow appears to have lived a charmed life in terms of the larger level places he encounters in his work. By circumstance, serendipity, and his own creativity and initiative, he and his family arrange to live in extraordinarily commodious places, far beyond what might normally be affordable on a writer’s earnings.

Fortuitously, his journalism career occurred prior to substantial cutbacks in print media budgets. Consequently, the author enjoyed the excitement of emerging Asia, lived the good life in Paris and Italy, and ended up with the phenomenal place experience of Northern California.

His story of Zelda is a modern day Pygmalion tale, in which Liza Doolittle in My Fair Lady, who was ostensibly the beneficiary of Professor Henry Higgins’s motivations, turns out to be Professor Higgins’ salvation. Similarly, though Paul Chutkow labels his Zelda as “the luckiest dog in the world,” many readers of his evocative, entertaining story would recognize that it is actually Paul Chutkow who is the luckiest guy in the world.