Zbig: The Strategy and Statecraft of Zbigniew Brzezinski 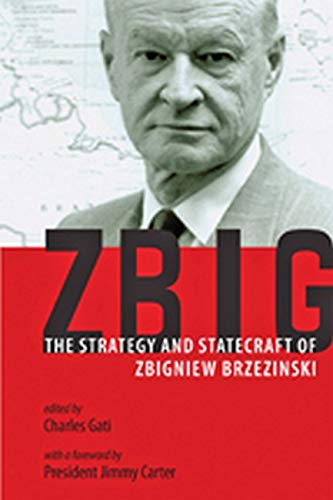 “. . . an informative and challenging introduction to Zbigniew Brzezinski.”

As the son of a Polish diplomat and witness to both Nazi and Soviet military aggression upon his homeland, Zbigniew Brzezinski brought a unique perspective as National Security Advisor to President Jimmy Carter.

Like his predecessor Henry Kissinger, Mr. Brzezinski was a foreign-born Ivy League intellectual who sharked up the Establishment's ladder. Zbig: The Strategy and Statecraft of Zbigniew Brzezinski edited by Charles Gati brings together essays by former students and fellow colleagues who knew Mr. Brzezinski from his various posts in academia and in public service.

Charles Gati also includes an extended interview with Mr. Brzezinksi at the end of the collection. A chronology, bibliography, and index wrap up the book.

Zbig functions as both a tool to increase awareness about Mr. Brzezinski's contribution to international affairs and a corrective to the dominant conservative mythology about President Carter's foreign policy.

The reigning conservative mythos asserts that Jimmy Carter's foreign policy was a disaster with the Iran hostage crisis as the most cited example. But the book illustrates that President Carter did more in one term than most presidents do in two terms.

The successes or failures of the Carter presidency on the domestic front, while important to framing presidential portrait, are irrelevant to the discussions in this anthology. It will be up to the reader to weigh the merits of President Carter's foreign policy, since most of the essayists collected here are certainly biased in that direction. It doesn't necessarily mean what they say is untrue, but the reader should always consider the source.

The essay collection is aimed toward a more academic audience, but a general readership would have no difficulty with the essays. For armchair enthusiasts and those struggling to unravel the complicated issues of international affairs and foreign policy, Zbig is a good place to start.

The essay collection also represents the lack of either academic or popular literature on Zbigniew Brzezinski, unlike the literature surrounding the tenure of Henry Kissinger, which is vast.

One impressive thing about Mr. Brzezinski is his commitment to the long term goals of stability and freedom, beyond partisan loyalty and ideological purity. He doesn't fit into specific slots like hawk or dove.

He forwarded the notion of “peaceful engagement,” a kind of active foreign policy that doesn't use military force as a primary tool. He backed Vice President Hubert Humphrey and supported intervention in the Vietnam War, yet following his retirement from government service with Jimmy Carter he supported Ronald Reagan and George H. W. Bush.

On the other hand, he was one of the first and most vocal opponents of President George W. Bush's ill-fated invasion of Iraq. He spoke out against the fraud and deceit emanating from the White House even while such liberal standard-bearers like Senators Hillary Clinton and Joe Biden voted for the invasion.

While ideological purists will bristle at his support for Reagan or his opposition for the invasion of Iraq, Mr. Brzezinski has always spoken his mind with truthfulness and intellectual precision.

Despite its aim toward an academic audience, Zbig is an informative and challenging introduction to Zbigniew Brzezinski. This striking figure in the political landscape bridged the worlds of Old Europe and the New World, academia and public service, and totalitarianism and the open society.

This essay collection should serve as prologue to a full-length critical biography and large-scale assessments of the Carter Administration's foreign policy.