Zapped By the God of Absurdity: The Best of Paul Krassner 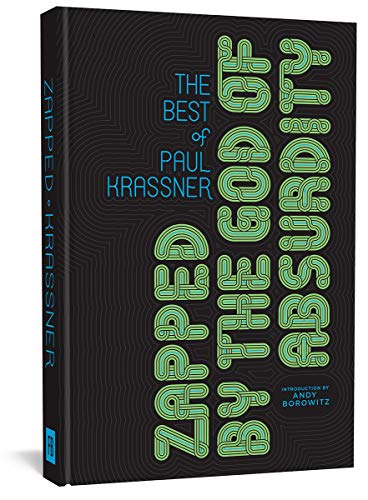 How well does Paul Krassner’s brand of humor hold up? Is there still bite in his barbs, and do his words still generate laughter? Fans of The Realist, which he founded in 1958 and edited for many years—and readers of his provocative books, including Who’s to Say What’s Obscene?—can begin to answer those questions thanks to a new, handsomely produced book, Zapped by the God of Absurdity: The Best of Paul Krassner.

If we think of Krassner, who was born during the Depression of the 1930s and who died in July 2019, primarily as a comic and a comedian we will likely be disappointed by Zapped. Sometimes Krassner is funny and sometimes he’s not at all funny, as he himself realized.

In his essay “Swimming in the Dead Pool,” he tells a story about visiting novelist Ken Kesey in Oregon soon after Kesey’s son, Jed, was killed in an accident. When a group of friends were sitting around in a circle and one of them mentioned that the Dead Kennedys, the punk rock band, was on tour, Krassner quipped “I wonder if Ted Kennedy is gonna see ’em.”

Kesey replied, “That’s not funny.” Krassner came back with “You’re right. I apologize.”

That was a rare occasion. Krassner usually didn’t say he was sorry about anything he wrote, and certainly not when he conjured Jackie Kennedy’s explanation, soon after JFK’s assassination, that she saw Lyndon Johnson “literally f------ my husband in the throat. He reached a climax and dismounted.”

That passage appeared in The Realist in a story titled, “The Parts that Were Left Out of the Kennedy Book.” To some, that description of the vice president and the president was sacrilegious, unpatriotic, and obscene. To others, it captured perfectly much of the madness and the unreality of what took place in Dallas, Texas in November 1963.

In the pages of his magazine, Krassner definitely pushed the limits of free speech as evident in three essays in the next-to-the-last section of Zapped: “The Taste of Semen,” “Eating S--- for Fun and Profit” and “’I F--- Dead People.” Talk about bad taste! For Krassner, coprophiliacs and necrophiliacs were both fair game for satire. So were God, the FBI and Communism.

In the late 1950s, and the early 1960s and then again in the wake of Watergate, Krassner recognized the places where American society was most vulnerable and went after them with a vengeance.

In the “The Sex Lives of Presidents,” which is included in Zapped, he impersonates Richard Nixon and describes H. R. Halderman proving "Tricky Dick" with oral sex. That image is merely a teaser. Krassner was after bigger game.

Indeed, he meant to bring down the Nixon White House and everyone around the president, including General Alexander Haig, G. Gordon Liddy, and John Ehrlichman, all of them involved with the Watergate conspiracy and also all of them, in Krassner’s casting, figures in a comic opera played out against the tragedy of Vietnam. Comedy and tragedy collided in his mad, mad, mad, world.

Krassner reuses the Nixon and Halderman gag in “The Autobiography of Monica Lewinsky,” in which he mimics the White House intern and has her say, “The reason I visited the White House 37 times was not for Bill—it was to be with Hillary—she was the one who desired me physically. The rumor about me being a lesbian was true.”

The Halderman, Nixon gag still seems funny, after all these years. Monica and Hillary as two lesbian lovers do not seem comical, though they might seem hysterically funny to some.

As William Zinsser insightfully noted in his book, On Writing Well, “humor is elusive and subjective. No two people think the same things are funny.”

In the Introduction to Zapped, the comedian Andy Borowitz writes that, “Given the choice between respect and laughter, Krassner always goes for the laugh.” A close reading of the essays in this book suggests that Krassner sense of outrage got the better of him and he was simply angry and not funny

In the essays contained in the pages of Zapped, he offers serious comments about “the absurd age we live in,” and about American ironies and contradictions.

The longer Krassner lived and the more insidious American society seemed to him, the more difficult it was for him to continue to do the satirical work he had been doing for decades.

In “Operation Chaos Lives,” he observes that John Hinckley’s attempted assassination of Ronald Reagan demonstrated that “once again, satire would be outdistanced by reality.”

Still, it’s important to remember that he didn’t satirize everyone and that he admired the members of his tribe: Groucho Marx, Robin Williams, Dick Gregory, and Lenny Bruce. Krassner's essays about them are all in Zapped.

Contrary to his assertion, he did have some sacred cows, or at least near sacred. Mother Theresa wasn’t one of them.

In “Alternative Facts” he pours out all his venomous feelings for Donald Trump, whom he calls “a crooked businessman, liar extraordinaire, bragging pussy-grabber, make-America-white-again, anti-choice, anti-Semite, false Christian” and an “insanely narcissistic dictator.”

Were he alive today, Krassner would add the word “impeached” to his long list of words that Americans might remember as they leave the 2010s behind and move into the 2020s.

If you loved The Realist, Zapped is for you. If you're a millennial and have never heard of Krassner you’d better get Zapped fast.

Jonah Raskin is the editor of Paul Krassner Speaks: From Lenny Bruce and Obama to “Hebdo.”