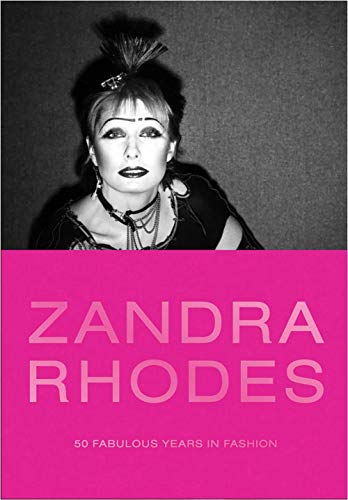 “Zandra Rhodes is a perennial.”

Merriam Webster defines perennial as: Present at all seasons of the year, persistent and enduring, continuing without interruption, regularly repeated or renewed.

Marinate on the fact that there are very few, if any other designers, like Zandra Rhodes who would be considered perennials, as she has never actually totally disappeared, and her work is constantly evolving and morphing within her varied areas of creativity.

The ability to qualify for such a moniker is the talent, credibility, experience, wisdom, longevity and humility that allow them to be someone new when need be. Ms. Rhodes is and never has been like anyone else.

Zandra is one of those whose presence is still felt some 50 years since the beginning of her career. She is a multifaceted designer who has endured and continues beyond anyone’s wildest expectations. She is textile designer, fashion designer, founder of a museum, innovator, and most of all she was so ahead of her time and so tuned in to the zeitgeist of those times.

Zandra Rhodes: 50 Fabulous Years in Fashion is unequivocally a monograph that belongs in every fashion library due not only to her vast skillset but because she remains to this day an original. In the world of fashion to have survived five decades with such Internet phenomena as Instagram and Facebook is about as daunting as it gets when you take into account that so much of Zandra’s notoriety started way before the Internet was even a germ of an idea.

Some readers will associate her only with dress design, some as one of the original punk designers who popularized the fashion of safety pins, and then of course there will be some who say who? Or haven’t the vaguest clue about her brilliance or her varied talents.

Even the informed and well educated fashion reader will be reminded that Zandra Rhodes was and is a force of nature that has rarely if ever been duplicated. One of the little morsels of information a reader might pick up is that she designed the costumes for the movie Bohemian Rhapsody (Freddie Mercury) just as she did for the late vocalist during his career. If you’re wondering if there are any personal aspects revealed about her life, then you will have to read it and find out!

The images within this photographic chronicle are once again a reminder of her great talents and contributions to the world of fashion and those who follow it.

Yes, Zandra Rhodes is a perennial.