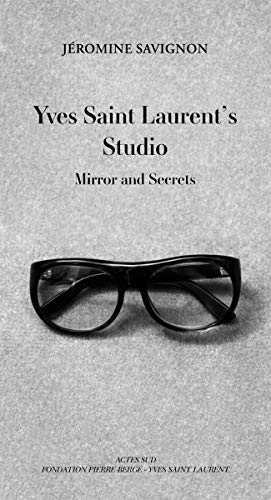 Chances are that if you are a devoted and committed fashionphile, you have been exposed to or have read thousands of words that have been devoted and dedicated to the life and times of Yves Saint Laurent. Most of you will also know that his name is synonymous with terms such as genius, couturier, troubled, moody, petulant, brilliant and fully immersed, obsessed, and possessed by his work or as Jérômine Savignon calls it his oeuvre.

Monsieur Savignon sets out to share with us what happened within the confines of that space known as the studio of Saint Laurent, the most sacred and intimate of surroundings for any designer. We are told of the very private moments that occurred when the designer performed his “dance” which was the inception and creation of a collection.

The book is hugely documented via previous interviews with those who worked with YSL as well as via mountains of interviews that the designer gave during his lifetime. The book comes off as both love letter to the designer and his talents as well as a narrative on his demons, rituals, and often fragile frame of mind. When reading this petit book you must keep in mind that it is the first publication from Actes Sud/Fondation Pierre Bergé-Yves Saint Laurent. Bergé was YSL’s longtime partner in life as well as in business and as such this mini book paints the designer in the most adoring and sympathetic light.

There is a relatively small amount of verbiage, but the words are emotional, factual, and possibly even a bit hypothetical. In my opinion, it is not the demons and doubts that are so enlightening and interesting as it is this so called dance which Savignon refers to in the story. The dance is a step by step lesson in how a collection evolves from the mind of a genius to paper to toiles to fabrications to samples. For those of us who have been absorbed into this rarefied world of fashion, this process remains an almost neverending source of interest.

Accompanying the brief text is a very intimate selection of never before published photographs of YSL and each one with a quote from the master as well as an explanation to put it in to context. Keep in mind that these are very carefully curated to expose the designer’s thoughts, ideas, past and philosophies about life, fashion, women, and himself.

“I’m thrilled like a child to feel that after fifteen years of struggle, angst and terror I have a grip on this craft that was always running ahead of me. Now I am holding it tight and I’ll never let it fly away again . . .” —YSL

There is no doubt in my mind that most readers will find this book illuminating and poignant. This is not a book to be read by those who only dabble in fashion as the depth with which the subject is approached is confined to those who are most intimate with the subject and the subject matter. In essence only those who speak fluent fashion will grasp the point of this paean to one of the greatest designers of the 20th century.