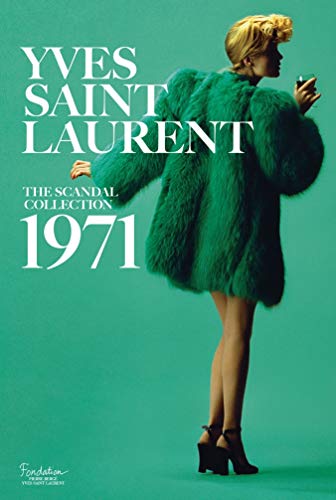 Unquestionably, Yves Saint Laurent and Christian Dior are eternally and inextricably coupled in fashion history since it is a well known that YSL took the reins when Dior passed. Both were seismic in their contributions to 20th century fashion and beyond. What few will recognize is that the two immensely talented men share the fact they are among the most written about and documented of fashion designers to have ever inhabited the world of fashion—which brings us to Yves Saint Laurent: The Scandal Collection, 1971.

Saillard and Veillon have meticulously, assiduously, and exhaustively mined the archives that Pierre Berge was so prescient, if not obsessed and compulsive, to have preserved. Berge, like him or not, has certainly provided these authors an immense archive that devotes itself solely to Saint Laurent and his entire body of work. Without this granted access, books on the subject can only be considered hearsay rather than being as authoritative as this one.

“What a relief, at last, to write that a fashion collection is frankly, definitely and completely hideous.”
—Eugenia Sheppard of the International Herald Tribune

The book reaches a level of authenticity and validity that hardly if ever has been rivaled due to the unprecedented access authorized by Berge as if by “papal” blessing. You read and see, from original press clippings and from the designer’s own diary, the words spoken and written by those who actually authored them. This is not he said she said; this is the real deal.

“What can we really call ‘new’ in fashion? Whether it’s a peplum or tights, it’s all been done a hundred times before.”
—Yves Saint Laurent interviewed about The Scandal Collection

Another reason that this book stands out in the genre is that it deals with a single designer’s single collection that was pivotal in the world of fashion. The only other designer who can lay claim to such an instance is Christian Dior with his New Look collection—another reason why the two designers are so inextricably linked.

The documentation in Yves Saint Laurent: The Scandal Collection, 1971 is nothing short of staggering, which is why it is a must read for anyone who truly harbors an interest in fashion and its history.