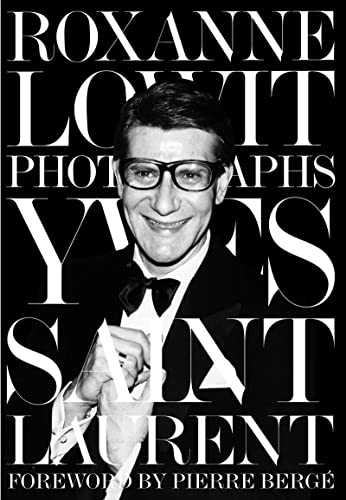 “. . . the kind of book that provides endless possibilities in terms of multiple readings as it is a timeline, a diary, a love letter to the designer’s career.”

Roxanne Lowit is unarguably one of the great photographers of our age who has captured some of the defining moments of our culture but what she provides us with here is possibly her greatest gift for us to date. Yves Saint Laurent is a visual homage to one of the most enduring, ubiquitous, and prolific designers of the 20th century. The focus is the designer and his seemingly endless imaginings.

Pierre Berge spoke of YSL in his eulogy: “I want to tell you the qualities I most loved in you: honesty, rigor, and perfectionism.”

Without question the general timbre of the book is laudatory and filled with accolades and remembrances from those he worked with during his career. It should be noted that the text is from a very small group of those who he treasured as friends and colleagues. Yves Saint Laurent is both a visual and nostalgic capsule version of the man’s life minus all the drama that surrounded him. This is YSL from 1978 until around the turn of the new millennium. This is the man at his height. The book allows us to understand exactly what Berge spoke of.

"Over the years I have learned that what is important in a dress is the woman who is wearing it." —YSL

Ms. Lowit shows off her subject in the most flattering light and captures his emotions via her lens. She doles out generous helpings of the designer surrounded with those who gave him the greatest of pleasure. Most, if not all, of what we get to see is the designer in his element, where he was happiest and immersed in what he did best—in his atelier, backstage, or enjoying the life his talents carved for him.

If you are a fan of the late designer or just a fashion enthusiast this book will deliver the exactly what you hope for in terms of visual content. This is the kind of book that provides endless possibilities in terms of multiple readings as it is a timeline, a diary, a love letter to the designer’s career.

For those who have only a fleeting knowledge of this great designer, then this book will certainly educate and inform from a visual point of view. These are not the retouched and magically enhanced photos we see today, but a far more realistic and honest telling of a once in a generation career.