YSL LEXICON: An ABC of the Fashion, Life, and Inspirations of Yves Saint Laurent 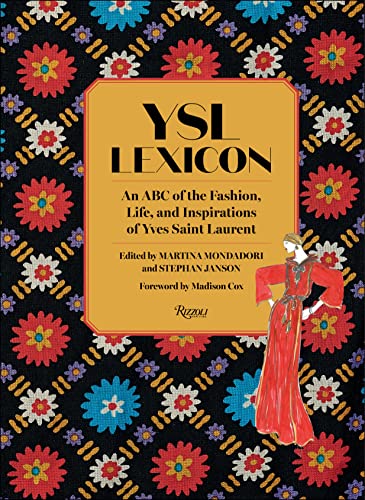 Merci Madison Cox green lighted this project and gave the authors complete access to all things Saint Laurent. YSL LEXICON is a priceless entry into the genre of fashion history. This is a monograph that will be devoured by those who were and remain devotees of YSL as well as for those who wish to know so much more than what has been written about him in the past. You will not be reading about his conscription, his mother, or his mental and physical health.

There are 26 chapters, but they are not necessarily alphabetical, and each title might not equate until the chapter is read. One by one the chapters and their titles reveal the designer’s modus operandi. The chapter titles are not always what the reader would expect such as “L” is Loulou, which is a no-brainer, but then there is” K” is for kitsch or “X” is for X-rated. With that said, YSL LEXICON is full of surprises and loaded with stories, remembrances, and personal images that conjure up the very private personal world of Yves Saint Laurent.

This reader and devoted fashionphile felt that this wonderful piece of writing should be used as a primer for all those who design clothes. St. Laurent had unwittingly created a manual which he followed from the very start of his career until the very end. It is endlessly educational regarding what one can learn from the past when moving into the future, which is the path he created. Most might harbor a preconceived notion that he was inspired by current events or cultural shifts, but in fact his interpretations of those elements came from the past.

YSL LEXICON: An ABC of the Fashion, Life and Inspirations of Yves Saint Laurent is a must read for anyone who wishes to become further enlightened about this designer’s oeuvre as well as fashion of the present times and into the future.