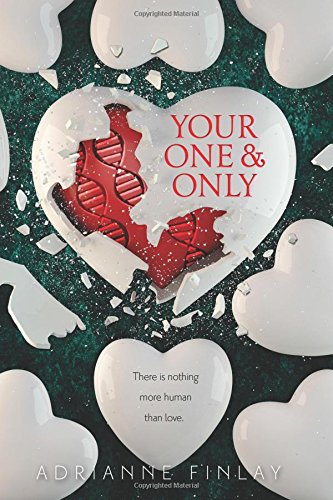 It’s the future; humankind is extinct, prey to the “Slow Plague,” an amalgam of all the ills flesh is heir to, “manifested in myriad diseases, lethal allergies, and physiological disorders.”

Hoping to prevent the complete destruction of the human race, the world’s best scientists gather in Costa Rica to begin Project Ark. Members are selected to provide their DNA, producing Homo Factus, the self-made man. There have been ten generations of each of the Original Nine, a new generation every decade, and the manipulated genetic material is wearing out.

To that end, original DNA is once more used and Jack is the result, the only genuine human in a world of replicas.

“We’ve manipulated the codes too much. We have no ability to strengthen genes weakened over centuries of replication. Inga thought your humanity would save us.”

At age 16 Jack is presented to clone-peers who immediately reject him.

“Where are his brothers?”

Jack has been raised in the jungle, isolated from others by surrogate parents Samuel-299 and Inga-296. Later, Inga-296 “fractured,” separating herself mentally from her sisters. She planned to run away to Median, a rumored, perhaps mythical, colony of humans deep within the jungle. For this “illness,” she is destroyed.

“She raised him to give him a sense of who he was as a human, when really all he wanted was to be like everyone else.”

One of Jack’s differences is that he plays music, a sensation discordant and painful to the clones. They don’t understand it, and therefore, fear it. The clones mock and physically abuse Jack. When he fights back, he’s declared violent and kept out of sight, not allowed to participate in any ceremonies or activities.

When the colony lab is set afire, he’s accused. Though there’s a witness to where Jack was, another claims to have seen him commit the crime.

Eventually, the truth emerges. At another settlement, there’s a second clone, Joshua, who is now a jungle phantom, declaring guerilla warfare on his “superiors.” When Jack and Joshua meet, it’s a battle of identical wills. Joshua wants to annihilate the clones as they did the humans who made them. Jack believes there’s a way for they can exist together.

Now Jack not only has to fight the Homo Factus community but his own twin.

Jack has made a few allies, however, among them Althea-310, who begins to understand the mechanics and beauty of music. She reads the diaries of the Original Nine, discovering there were actually ten, but his DNA wasn’t used. She learns that the clones imprisoned the humans, killing them.

Althea-310 detaches herself from the Hive Mentality. She wants to leave with Jack, seeking out Median, to live there.

The problem is, the colony at Vispera has begun fracturing. Other clones are separating, also wanting to go to Median. The colony isn’t about to let any escape, and Joshua is still a very present and deadly danger.

If the reader cares to have a philosophical view of Your One & Only, it doesn’t take much to see this novel as an analogy for contemporary times and current events. Jack represents anyone on the receiving end of prejudice, condemned for the misfortune of simply being born different. Jack and Joshua are the dichotomy within that minority, one opting for violence, the other for peaceful coexistence.

It’s interesting to note that no matter the cruelty perpetrated upon him, the clones are always in the right. They suffer no consequences. Whenever Jack retaliates, however, he’s committing a crime and is punished, with the rationalization, “Humans have always been a disaster. Endless war, poverty, genocide, inequality, pollution, to say nothing of an obsession with sex and reproduction. Your kind would’ve killed the planet had they lived. That’s the human legacy, all just historical memories now.”

On a purely entertainment level, this novel will always suffer from comparisons to 1984 and Brave New World, but may come away the better because of its positive ending. It also raises many questions the reader will find unanswered. If Jack isn’t a clone of the tenth member of the Originals, who supplied his DNA? What happened to Joshua? Is Jack’s Happily Ever After actually only a Happy for Now?

Your One & Only’s lack of answers will make the reader hope this novel is the first of a truly innovative new series, revealing, “There is nothing more human than love.” It would be interesting to see where Jack and Althea-310’s exodus leads.