Your Nostalgia is Killing Me (Grace Paley Prize in Short Fiction) 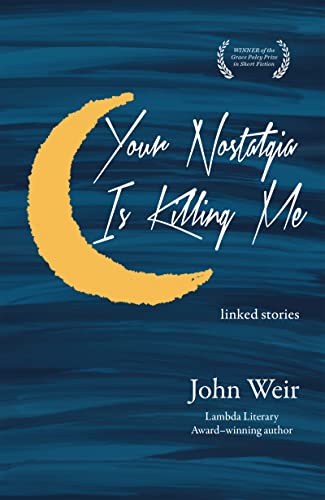 The horrific AIDS epidemic inspired a flourishing of literature by writers more openly, proudly, often angrily, gay than their predecessors had been. These young writers had been surrounded by suffering and death from a devastating disease, accompanied by rejection from family and indifference from government and the medical establishment. John Weir’s 1989 novel, The Irreversible Decline of Eddie Socket, a fictional chronicle of a young man who ultimately dies of AIDS, was wistful, witty, and ironic. Weir wrote one more novel, What I Did Wrong (2006). Your Nostalgia Is Killing Me is a collection of 11 stories, most of which have been published in literary magazines.

The stories, written in the first person, center on a middle-aged man named John Weir who has never gotten over the traumas of schoolyard bullying and surviving the illness and death of his closest friend decades before. He suffers from a crippling self-absorption that makes relationships impossible.

Most of the stories in the volume are records of failed relationships. First there is Dave, his best friend who does not suffer his final HIV-related illnesses gracefully. The narrator’s sexless relationship with Dave seems to be the most important relationship of his life. He does all he can to help Dave but wonders what they really are to each other. Perhaps, as the narrator observes in another story, he is drawn to lonely men—more to the loneliness than to the men. David’s behavior at the end of his life sours the love the narrator felt for him.

Dave is followed by Mike, a songwriter-performer, who uses the narrator’s diffidence and disappearances as fodder for his hit songs. Wherever he goes, the narrator hears broadcasts of songs about his insensitivity and inability to love. Worse, though, is the moment when Mike moves on from writing about him.

While he was involved with Mike, the narrator was having a brief affair with a younger heterosexual fellow acting student. The tables were turned, and the narrator was in the position of trying to pursue someone who couldn’t return his affection.

Finally, there was a sexless relationship with Scott, another middle-aged man, who wanted to communicate with another AIDS survivor. Scott craved companionship, but not sex.

Completing the cast of characters is John’s larger-than-life mother who now lives in a retirement community in Pennsylvania. He visits her when he needs to borrow her car.

Weir writes beautifully, elegantly. His loving descriptions can make even ugly sections of New York City, which seems to be his first love, shine. His narrator has the gift, or curse, of being able to dissect his own emotional shortcomings. Narcissism abounds, but Weir’s sharp irony makes it bearable.