This Is Your Mind on Plants 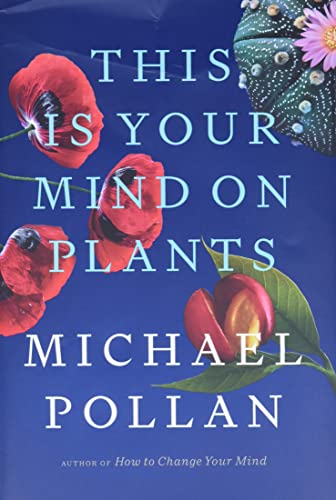 Michael Pollan has written about apples (Botany of Desire), corn (Omnivore’s Dilemma) and many other edibles (Food Rules).

In his new book, This Is Your Mind on Plants, he explores opium, caffeine, and mescaline—all of them substances he has tried and that he mostly likes, all of them consumed by humans, but not as food and not for nutrition.

“Of all the many things humans rely on plants for—sustenance, beauty, medicine, fragrance, flavor, fiber—surely the most curious is our use of them to change consciousness,” Pollan writes in the first sentence of the book.

From there he goes down a rabbit hole into a wonderland where he makes use of “plants,” not “drugs,” and monitors the experiments he performs on his own mind. A professor and a gardener, he’s an excellent subject to study.

Indeed, he’s been curious about plants and consciousness for a long time. In The Botany of Desire (2001), perhaps his best book, he writes about marijuana, as well as apples and potatoes. That might seem like an odd combination, but Pollan makes the mix work.

He takes much the same approach here, moving with ease from opium, which might strike some readers as an exotic substance, to caffeine, which is as ordinary as an apple or a potato, to mescaline, which has played a big part in Indian ritual and religion.

Pollan is very conscious about being a white man writing about Native American culture, which is not his own. He worries about appropriation, a sensitive subject these days, that runs all the way through his new book.

This Is Your Mind on Plants tells a story about three journeys that take the author on wild rides and exciting adventures. All along the way, he meets fascinating people like Humberto who cultivates coffee beans in Colombia in South America.

“Humberto had told me,” Pollan writes, “it takes fifty or so coffee beans to make a single cup of coffee; after a half hour of picking I had collected enough beans for making four or five cups, and already my back and feet were in an uproar of pain.”

Pollan situates himself and his wife, Judith, in the thick of the action. For those who like personalized narratives this will be an attraction. Others might want to skip the autobiographical material and get to the information that the author has to offer about the substances he explores.

In addition to his experiments on himself, the author draws on the library research he has conducted and his close reading in books like Aldous Huxley’s The Doors of Perception (1954), which opened wide the doors to the wonderful world of psychedelics.

“Though the word ‘psychedelic’ wouldn’t be coined until 1956,” Pollan writes, Huxley’s account of his 1953 mescaline journey stood, and stands still, as the canonical ‘psychedelic trip.’”

Again and again Pollan gives credit where credit is due. To Quanah Parker, for example, a curious explorer and “missionary,” as Pollan calls him, who was the son of Peta Nocona, a Comanche chief; and Nautda, a white woman.

Quanah “deftly navigated the transition from outlaw to prosperous rancher and trusted go-between with the authorities,” Pollan writes. He adds that he was “the Johnny Appleseed of peyotism.”

What’s new and exciting in This Is Your Mind on Plants is that Pollan is both the reliable guide and the brave guinea pig, an explorer with an insatiable curiosity, but also with a keen sense of boundaries.

He’s not about to blow his own mind, and he doesn’t want to blow the minds of readers, either.