The Younger Wife: A Novel 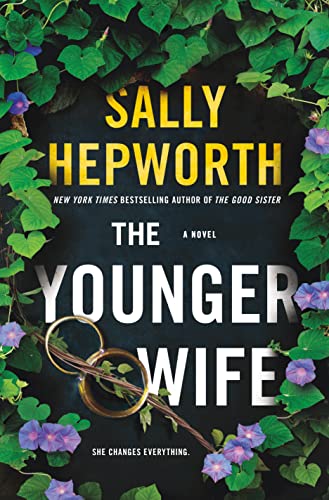 Middle-aged Stephen Aston, a prominent heart physician, hires Heather Wisher, a young interior designer, to decorate his home, hoping to make his wife Pam happy. But as time passes, Pam sinks further into dementia, forcing Stephen to institutionalize her. Stephen's daughters, Tully and Rachel, are disheartened this illness has taken over their beloved mother's mind but understand she needs round-the-clock care. What they can't understand is how their father would suddenly take up with Heather, especially seeing he is still married to Pam. Heather could be their sister; she is about their age.

Heather is beyond joyous. Having grown up poor and in an abusive home, all she desires is to be "someone." Being wed to Stephen will make this happen. Her social status will rise, and she'll want for nothing, but the best part of this is her love for Stephen. In him, she sees a kind and caring man, nothing at all like her callous father.

Stephen has his future all figured out. He will quietly divorce Pam and marry Heather though his daughters are totally against this. To them, Heather only wants the family money and status, and how dare their dad find someone else while their mother is still very much alive, though not conscious of anything going on around her.

Rachel and Tully both have their own problems, and this new scenario only adds to their stress. Tully is high-strung and overly dramatic, and she is finding her family is falling apart. The mother of two young boys, she feels she is losing control of them, not to mention her husband has lost a significant amount of money in a business deal, and now they have to sell the home Tully loves. How can she handle this tension? She finds a way— undertaking acts she's been doing for years, which soon catches up to her and gets her in trouble.

Meanwhile, Rachel is single. She has not dated and refuses to, rather she receives fulfillment as a baker, and her concoctions are well-known and loved. Trauma from Rachel's past keeps her from living her life to the fullest. And now, she is having difficulty adjusting to her mom's deteriorating condition and the news her father is due to remarry.

Though Pam lives apart from the family, Stephen still considers her a part of it. The girls go to see her, and even Heather visits, without Pam realizing what the man she wed so many years ago is planning. In a few lucid instances, she drops digs about Stephen to her girls, though they do not know if she is angry at her present situation or there is a reality in her comments.

The wedding guests are mostly comprised of Stephen's colleagues, though he insists Pam attend. He persuades Rachel and Tully to bring her, reminding them of how much their mother enjoys parties. Is he trying to be considerate, showing he still loves his wife or is he actually being cruel? Secrets from the past come to light, and Tully, Rachel, and Heather begin to question Stephen's actions. Does anyone really know what goes on in a marriage or a behind closed doors?

There are three points of view in this novel—Tully, Rachel, and Heather. Their history makes them the adults they have become, each with their personal secrets and injuries. The dysfunction shown could be that of any household. Does any family exist without some type of dysfunction? Many scenarios are addressed—the heartbreak of dementia, the pain of rejection and hurt, and the fear of the unknown.

The Younger Wife is a page-turner, bursting with suspense and tension, up to the conclusion, a shocker sure to leave the reader with questions: Did he, or didn't he?