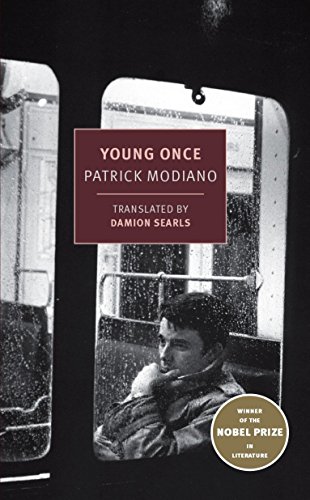 “Young Once is an elegant noir written by a master prose stylist.”

Young Once, by Patrick Modiano, tells the story of Odile and Louis. Cunningly simple in its execution, the short novel begins with the couple and their two children in the French countryside near the Swiss Alps. They live in a chalet and appear to have a happy life. After this set-up, Louis has a flashback to when he recently left military service and meets his friend Brossier. Unlike Proust's slow dissolve into childhood, Mr. Modiano makes the flashback a jump cut. (Think the candle-to-desert cut in Lawrence of Arabia.) Instead of the madeleine pastry, the jarring image is Louis's wet socks. His desire for some dry socks sets off a series of events filled with ambiguity and unease.

In 2014 Modiano won the Nobel Prize in Literature “for the art of memory with which he has evoked the most ungraspable human destinies and uncovered the life-world of the Occupation." Young Once takes place after the Occupation, but those black years under Vichy collaboration remain an inescapable shadow, coloring and poisoning every human relationship.

Published in 1981 by Éditions Gallimard, Young Once is a perfect example of European neo-noir. An indefinable menace and unease permeates the novel. The plot is sparse and explanatory details almost nonexistent. Louis, with the help of Brossier, ends up working as a garage attendant for Bejardy. Meanwhile, Odile struggles to find success as a singer. She meets an enigmatic songwriter and a predatory record producer. Odile, beset by ambition and vulnerability, becomes fresh meat to the Harvey Weinstein-ish producer.

Louis works in Bejardy's garage, witnessing luxury cars drive in and out. The job would be a mundane affair except that this is postwar France, the Occupation still a fresh wound. People's backgrounds become blurred, equal parts evasion and mythology. “The way he sat there, . . . he seemed like a successful lawyer, and the words ‘star lawyer’ came to Louis's mind.” The word “seemed” carries a lot of weight after the treasonous criminality of Vichy. It speaks to Modiano's genius as a writer that when Louis and Odile discover important information about Bejardy's past, it still feels like nothing has actually been solved. They know more about his actions, allegedly, but he still remains a cipher. (Bejardy's admixture of wealth, criminality, and charisma is reminiscent of William Gibson's sinister ad exec Hubertus Bigend.)

Because Patrick Modiano won the Nobel Prize, it becomes easy to heap praise on his work. Winning the Nobel Prize shouldn't aspire slavish adoration, but challenge reader and critic alike to desire to investigate this supposed greatness. What makes Modiano's writing so noteworthy? What do “the art of memory” and “the most ungraspable human destinities” have to do with Odile and Louis? The couple merely seem like so many others, simply trying to make it in a harsh, unforgiving world. In Young Once, the prose remains largely unobtrusive.

As befitting a noir, the lean prose represents the very antithesis of the languorous and luxurious Second Empire decadence of Marcel Proust. But the novel isn't without passages of enduring beauty. Modiano will end an otherwise ordinary passage with a delicate aperçu. “One day, she will burst through this screen of noise and indifference and be nothing but a voice, a clear voice, set free, like the one she is listening to at the moment,” Odile thinks to herself. Earlier in the novel, Louis glories in the fact that “There was nothing, and no one, to fear with these crepe soles.”

Credit must be given to Damion Searls for the translation. Searls has translated French and German works, including the aforementioned Proust. Other authors translated include Rainer Maria Rilke, Elfriede Jelinek, Hermann Hesse, Robert Walser, and André Gide. His current project is about Hermann Rorschach and the Rorschach Test. Like the test, Young Once exists in a permanent state of ambiguity. Unlike the mystery genre, the novel is less about a whodunit or solving a puzzle than feeling around in a fog.

Nothing is explained, and that which is explained leaves Odile and Louis second-guessing themselves. Even their brief vacation with Brossier to meet his girlfriend at the university creates an atmosphere of alienation instead of relief. While mistaken for college students, since both are in their early twenties, the ambiance is less vacation than feeling like interlopers. The world is alien and exclusionary. Both know they will never belong here. The breath of fresh air becomes more like parting the curtain to witness a Masonic ceremony. A clique of students enthuse over Guy Burgess, the mid-century British double agent, providing a tiny detail as to when the novel takes place.

Young Once is an elegant noir written by a master prose stylist. With no introduction or explanatory apparatus, New York Review Books Classics made the right decision and not over-burdening the text. Nothing ruins a good joke when someone explains it. At little over 150 pages, Modiano’s brief masterpiece reveals a postwar France riven with forbidding ambiguities and untrustworthy explanations. He created a noir closer to David Lynch's Lost Highway than Simenon's Maigret novels.