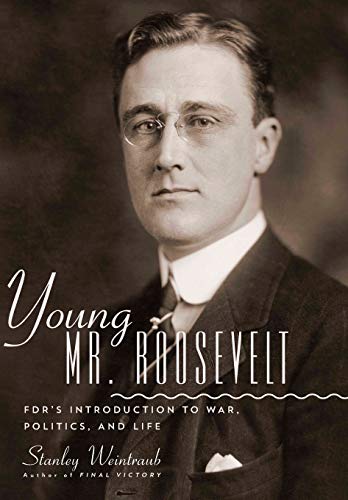 If Franklin Delano Roosevelt had not entered politics he “might endure the occasional preparation of briefs for a prestigious Wall Street firm,” had “an arranged marriage with a well-to-do society beauty,” and finally “would be remembered in a modest obituary in the New York press, but hardly beyond—and quietly forgotten.” If FDR hadn't been so ambitious, he might have ended his life as a minor character in a Wodehouse or Auchincloss novel, a moneyed patrician of no consequence.

History has shown a different light on this cadet branch Roosevelt. As Stanley Weintraub chronicles in his new book Young Mr. Roosevelt: FDR's Introduction to War, Politics, and Life FDR was constantly striving to live up to the shadow of his wife's uncle, Theodore Roosevelt.

Mr. Weintraub also paints a picture of early 20th century Washington,DC, where the residue of Victorian social mores make life resemble the novels of Henry James. (One of the controversies about the Roosevelt household was whether to employ white or black servants.)

FDR followed his stint in the New York state senate by winning the nomination to become Assistant Secretary of the Navy, a post held by Theodore Roosevelt. The former President Roosevelt's career trajectory after manning a desk as Assistant Secretary of the Navy would involve leading the Rough Riders in the Spanish-American War, becoming Vice President, and then President after President McKinley was struck down by the bullet of an anarchist assassin. FDR presumed a likely career trajectory. While unseasoned politically, he never lacked in ambition, although some would characterize the drive as arrogance.

Once he settled down in the Assistant Secretary position, he had to contend with a myriad of personalities and factions. His immediate superior was Josephus Daniels, a landlocked teetotaler from North Carolina, and President Woodrow Wilson, a detached, cold, pacifist-leaning arch-segregationist law professor from New Jersey. While acting through subterfuge and deception beyond Daniels's back, FDR become a beloved figure to the Navy men, both enlisted and officers.

His status as an amateur sailor made an impression on the desk admirals. Unlike Daniels, FDR used correct Naval terminology for things. (In the Preface, Mr. Weintraub relates how doing interviews with Navy men for Dark Victory, he kept getting the same answer as to why they voted for FDR. Despite not being a combat soldier, they considered FDR “a Navy man.” Only then did Mr. Weintraub realize that they meant his time as Assistant Secretary of the Navy.)

The Democratic Party at the dawn of the 20th century was very different from the one existing now. Proudly allied with the racist Dixiecrats of the South, preserving Jim Crow was a key fixture in keeping loyal voters in the South. Despite Woodrow Wilson's progressive internationalism beloved to the Left, Mr. Weintraub reiterates that Wilson resegregated Federal facilities in the District of Columbia following his inauguration.

Throughout the book, the past and the future keep bleeding through the present that FDR is living. Beyond partisan politics, FDR is constantly working towards expansion and modernization of the Navy. Teddy Roosevelt's storied White Fleet has become obsolete and archaic. FDR's crusading for Navy modernization also has echoes in the future with the impending attack on Pearl Harbor hanging over the narrative.

Naval unpreparedness and the pacifism of Wilson and William Jennings Bryan, the Secretary of State, came to a head with the outbreak of the First World War. It should be noted that the United States, while isolationist in its foreign policy, wasn't inactive in deploying troops. Ever since the Spanish-American War, the United States had been doing damage control in the Caribbean, putting out revolutionary fires in numerous island nations as well as the occasional foray into Mexico. The foundation for American foreign policy was the Monroe Doctrine.

To many in the United States the First World War was an obscure dynastic squabble of little impact. (Akin as to how many see Syria, albeit this jaundiced view is based on interventionist exhaustion and a moral disgust at supporting pro-US dictatorships and absolute monarchs for several decades.)

FDR campaigned tirelessly for Naval modernization as the European conflict grew more intense. This became a matter of self-defense when German U-boats began attacking ships from the United States and Great Britain. Wilson tried hard to remain neutral, but after the Germans torpedoed the Lusitania, outrage among the American people began to escalate.

FDR's role in the conflict began to wane as the Allies finally won domination of the seas and the fighting focused on the movement of armies. (Although the Marines did see combat in numerous battles and the Marines, as a part of the Navy, were under FDR's purview.)

Mr. Weintraub concludes his book with FDR's doomed campaign for Vice President with presidential nominee James Cox. By this time, America had soured of Wilson's League of Nations idea and had begun to recover from the influenza pandemic.

Mr. Weintraub is the author of numerous history books, many of them Christmas themed, including Silent Night: The Remarkable Christmas Truce of 1914 and General Sherman's Christmas. Savannah, 1864.

In terms of biographies, the “before they were famous” biography of Young Mr. Roosevelt also resembles Island of Vice: Theodore Roosevelt's Doomed Quest to Clean Up Sin-Loving New York by Richard Zacks (Doubleday, 2012). Young Mr. Roosevelt is a brisk, short, and informative book that adds to the already voluminous amount written about FDR's unique and influential presidency.