You Will Not Have My Hate 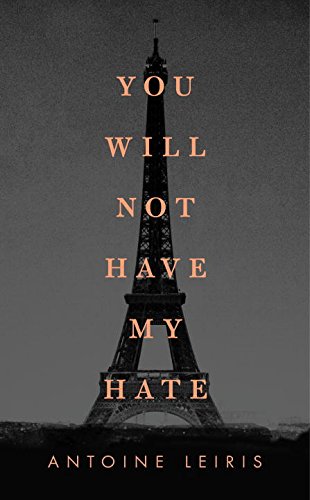 You Will Not Have My Hate is French journalist Antoine Leiris’ memoir written in the days after he learned that his wife Hélène Muyal-Leiris had been slaughtered at the Bataclan Theatre in Paris on November 13, 2015. Somehow, in his shock, he keeps his mind, heart, and soul together enough to chronicle the immediate impact on his life as he cares for his 17-month-old son Melvil.

In the days after the event, Antoine also wrote an open letter addressed to Hélène killers and posted it on Facebook with the ending line “"On Friday night you stole the life of an exceptional person, the love of my life, the mother of my son, but you will not have my hate." His message resonated on networks around the globe as the images of the horror and carnage of the Paris attacks flooded TV screens and social media.

He has a further message for the terrorists in his book. “Alone with my son, who will soon ask me what happened that night. What would I be telling him if I placed the responsibility for the circumstances of our life at someone else feet? If it was to those men that he had to turn in order to make sense of things? You cannot have his hate either.”

Antoine and Melvil are among the hundreds of families whose lives were shattered that night from multiple terrorist attacks at several locations. Now they are violently forced to rebuild their world in the City of Lights that has been the very symbol of liberté, now a repeated target of international terrorism.

Antoine describes the reality of that horrific night as he and his brother tear through Paris streets and search every hospital to locate his wife. Then the surreal shock of those first moments when Helene’s sister called to tell him she did not survive the attack. Then the days leading up to her funeral and being with Melvil to somehow make him understand instinctively that his mama would not be coming back home.

In those lonely moments he is most resolute to rebuild this family even when he accepts that “there will be only the two of us, but we will take up the whole picture. She will be with us, invisible, but there. It is by our eyes that you will read her presence, in our joy that her flame will burn, in our veins that her tears will flow.”

You Will Not Have My Hate is a courageous and profoundly life affirming manifesto that will live beyond any momentary victory of terrorism. How indestructible these beautiful words are when Antoine assures the terrorists, “I don’t have any more time to waste on you, as I must go to see Melvil, who is just waking up from his nap. He is only seventeen months old. He will eat his snack as he does every day, then we will play as we do every day, and all his life this little boy will defy you by being happy and free . . .”

This slim volume is not only a heartbreaking eulogy to his wife, but a most courageous response to the violence done to him, profound in its truth and intimacy and in its power to enlighten all of us in our most perilous times.