You Must Change Your Life: The Story of Rainer Maria Rilke and Auguste Rodin 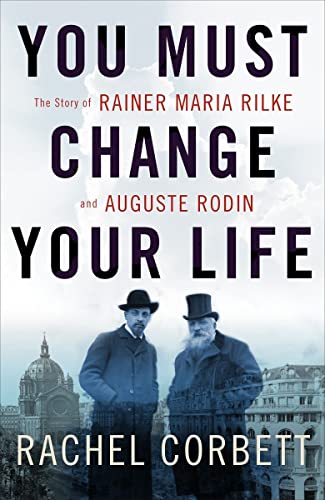 Rachel Corbett is editor of Modern Painter magazine and her arts coverage appears in The New Yorker and The New York Times. Her first book You Must Change Your Life examines the unwieldy relationship between sculptor Auguste Rodin and poet Rainer Maria Rilke. Corbett writes in her introduction that she was introduced to Rilke’s writing when her mother gave her a copy of his artist survival guide Letters to a Young Poet.

Rilke’s book is his own declaration of independence after years as Rodin’s slavish disciple, as he tried to realize his own artistic voice. Corbett makes this a cautionary tale of toxic hero worship with a measure of a bromance of artistic egos.

Rilke met Rodin in 1902, when he was just 21, on assignment to write a short biography of Rodin, who was 62, an artistic lion in winter. Later Rilke became Rodin’s secretary, lived on his estate, insulating the master from business problems and fielding his personal correspondence.

Rodin wasn’t anyone’s disciple. He grew up in a poor working class family, and his father wanted him to become a lawyer, but he wasn’t interested. In the mid-1800s Paris was being rebuilt by German engineers, and Rodin pursued a life of a tradesman, but showed such talent working with materials that he entered Petit Ecole and immediately advanced as an illustrator and sculpture.

He rebelled against the overt nepotism that installed privileged artists to the Grande Ecole that secured career paths. Rodin was rejected from the staid conventions of arts establishment and initially was mostly ignored in France, while being lauded as a defining innovator in England and Germany.

Matisse and Picasso were the architects of new concepts in art that flew in the face of classicism and forged the aesthetics of abstract realism. Rodin similarly struck out on his own; he changed an art form from its rigid classicism to more expressive medium. Rodin’s sculptures were eventually lauded for their kinetic energy and earthy expressionism. Rodin was a personal and artistic voluptuary.

By the turn of the century Rodin was the revered as a French master, and increasingly self-absorbed, he treated everyone around him like an indentured servant, including his lifelong partner Rose Beuret, and further treated his devoted son with abject distain. His destructive affair with fellow sculpture Camille Claudel caused her lifelong difficulties, and she had to go to great lengths to be artistically recognized separate from Rodin’s reputation. She even exhibited a revenge statue depicting the lecherous old artist debasing his models.

Meanwhile, Rilke’s marriage to sculptor Clara Westhoff was not as destructive, but still dysfunctional, even though they remained devoted to each other. Rilke’s obsession with Rodin’s life and philosophy was such that at various times his marriage and relationship to his infant daughter verged on abandonment.

Corbett’s expose of the plight of gifted women artists at that time struggling to be taken seriously by the misogynist art establishment is deftly recounted. Westhoff eventually sought refuge with Paula Becker, her lifelong friend and fellow artist.  They rejected their proscribed roles as spouses of artists and eventually rebelled to pursue their own professional lives.

Rilke’s relationship with Rodin came to an abrupt end when he inadvertently overstepped his position as his secretary and Rodin fired him and unceremoniously tossed him out. But by this time Rilke was starting to come into his own. Even as he was fighting bouts of writer’s block and depression he was in fact becoming a successful writer and that rarest of creatures, a poet with rich patrons. He also cleaned up his personal relationships to an extent and rebuilt his life, until WWI changed the fates for everyone in Europe.

All of this drama plays out as the old world empires were disintegrating and the social, political, and modernist revolutions in art were coming to the fore. Corbett’s authority in condensing art history, academics, and theory is rigorously laced through the book. The book is peppered with cameo portraits of luminaries from other spheres who revered Rodin including Isadora Duncan, George Bernard Shaw, and Sigmund Freud. All of their careers are set against the backdrop of the art and literary worlds of Europe at the turn of the 20th century and the years leading up to WWI. Corbett’s eloquence and dramatic lens is fully focused throughout.