You Have to Fucking Eat 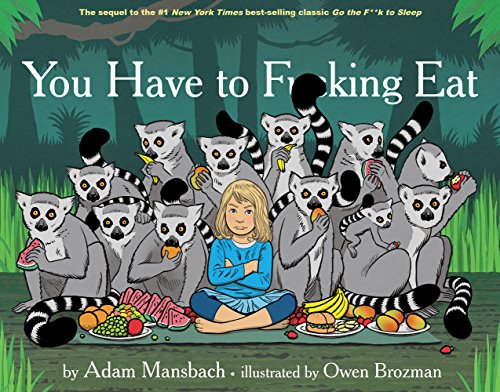 "A hilarious sendup of the eternal fight between kids and their parents over what to eat and when—if at all."

This is a sequel to Mansbach's first offering, Go the Fuck to Sleep (also reviewed in New York Journal of Books), that startled the publishing world into ubiquitous international hilarity. The original title has been translated into 35 languages, including a G-rated version Seriously, Go to Sleep and a Jamacan Patois translation titled Go De Rass to Sleep. Needless to say, the book's been a rousing success.

But what made Go the Fuck to Sleep so darn funny was different from what makes You Have to Fucking Eat funny. The first title shocked us. Formatting it like a regular four-color picture book was the set up. You have certain expectations when you pick up a picture book, so you look forward to being entertained by sweetness and light or treated to humor that every four-year-old child would delight in. Then you read the title and stop short. No . . . it can't be.

Then you open it and find yourself seriously hooting aloud and peeing in your pants because finally someone has put a voice to what we parents really think when our children fight the night.

This reaction is more than mere titilation, though we are surely titillated. It's more than just shock at the incongruity of the format and the content. It's more than just the deliciousness of recognition and reflection of one's own parenting experience. It's ironic payback. It's so funny each time we read it because who can't remember being exhausted at the end of a long day and being forced to read 10 picture books to a selfish wretch of a child who fails to react appropriately and go to sleep.

You Have to Fucking Eat is a different beast. Frankly, when the ARC arrived in the mail, I looked forward to opening the pages, but the title no longer held the imperative shock value of the first book. I read this one through quickly the first time. Okay . . . funny. Not gut-splittingly funny, but humorous. Then I read it again. It was funnier the second time for some reason. Then I picked up my nosy 13-year-old twi girls who saw the book on the passenger seat and snatched it up with an "Ooooooo! Moooom-my! What is this?" I reminded them of the first title that they had somehow scoped out on my shelf two years ago. "Remember when you sneaked into my office and read that adult picture book with the totally inappropriate for 11-year-old girls language in it?" They nodded. "Well, this is the sequel."

And then they started reading it aloud. The third spread, accompanying a picture of a kid with a surly look oon his face clearly dissing a huge plate topped with delicious stacks of pancakes covered with syrup, offers this:

"Your cute little tummy is rumbling
And pancakes are your favorite treat.
I'm kind of surprised that you suddenly hate them.
That's bullshit. Stop lying and eat."

That's funny. So is this, which accompanies a picture of a toddler in a high chair leaning her entire body toward the floor as she eagerly reaches for a roll that has clearly gotten away:

"I hope you know it's super-special
To go to a restau— Hey, back in your seat.
You shitting me? This whole menu's crap to you
But a roll on the floor—that you'll eat?"

The first title was startlingly hilarious, a little less so with each subsequent read. But each time you read You Have to Fucking Eat it gets more and more funny.

How do you fucking explain that?