You Don't Love This Man: A Novel 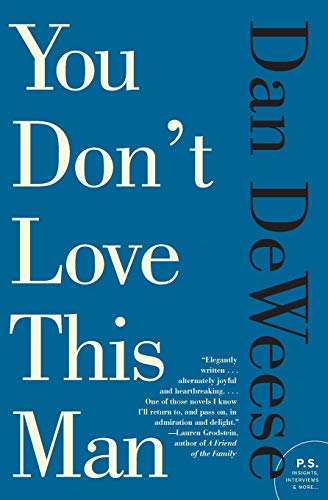 Dan DeWeese’s well-crafted and engaging novel, You Don’t Love This Man, is unusual in that it is so well written but lacks real, thought-provoking substance.

Narrated by Paul, a bank manager, the novel relates his misadventures, including a bank robbery, on the day of his only daughter Miranda’s wedding to his own friend, Grant. The narrative is interspersed with flashbacks of Paul’s life, including his friendship with Grant, his marriage and divorce from Sandra, and Miranda’s childhood.

Although the novel revolves around one eventful day in Paul’s life, the plot is fairly complex. Mr. DeWeese masterfully interweaves past and present and maintains quite a bit of tension particularly in light of the fact that the story isn’t really that suspenseful. He opens the novel: “I lost my daughter once. She was three. It was after dark on Halloween, and we were standing on the sidewalk in front of a house down the street from our own.” Paul then links this nail-biting scene to his grown daughter’s absence or lack of availability to her father on her wedding day. Although she is not in grave danger and, at worst, might cancel her own wedding, the narrative effectively produces anxiety and momentum for a story that is relatively mundane.

Though obtuse in his personal relationships, Paul is an astute, witty, observant narrator. For instance, he describes a detective who investigated an earlier robbery of his bank branch: The clothes appeared to be a size too large, and this, in combination with the fact that he couldn’t have stood more than five and a half feet tall, lent him a shrunken quality, as if life had at some point drowned and then roasted him, and though he had survived, it was in this reduced state.” Or in describing the birth of his daughter he wryly notes, “They’d scheduled a tentative order to the day’s birth’s, he said—like airplanes lined up for takeoff.” Paul, the working class boy, turned banker is too articulate, verbal, and perceptive to be credible. Basically, he’s a writer masquerading as a banker.

Many of the other characters in the novel are also implausible.

Catherine, Paul’s co-worker at the bank, is a bit too articulate, quick and witty—all of the time. His ex-wife, Sandra and friend, Grant, are two-dimensional clichés. Further, the plot of the novel relies too heavily on neat coincidences. Paul first meets his friend Grant when he is dating Gina, Paul’s ex-girlfriend. Gina later employs Miranda, who becomes engaged to Grant. The same man robs the same branch of Paul’s bank 25 years later, and then Paul encounters him at a beer festival in town later that very day.

There’s just a bit too much symmetry and tidily intersecting stories. You Don’t Love This Man would probably make for a successful and entertaining Hollywood romantic comedy or comedic drama.

In terms of structure and prose, You Don’t Love This Man is an impressive work. It reads well, is engrossing, at times, and would make an enjoyable vacation read. It’s content is slight, but its writing is substantial.