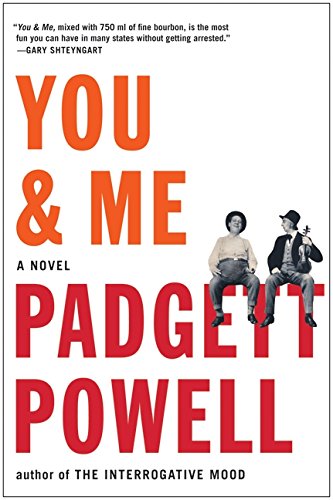 “You and Me doubles down on that Seinfeldian quality of being a book about nothing. . . . more anti-novel than novel.”

An acclaimed author has just written a new book. It is witty, sophisticated, and sad. Sounds very promising.

In 2009, the much lauded Padgett Powell wrote the highly original novel, The Interrogative Mood, a question-happy sendup of wordplay and banalities. Now he returns with You and Me, a novel written entirely as dialogue between two men sitting on a porch somewhere in the American South.

Having previously forsaken the declarative sentence, author Powell now sets out to forsake plot. You and Me doubles down on that Seinfeldian quality of being a book about nothing. Two unnamed men engage in roughly a hundred conversations, none longer than a few pages, many only one page. There’s no sex, no drugs, no violence. You and Me is more anti-novel than novel.

A lesser author could never pull this off. But Mr. Powell loads meaning into the simple statements of his two redneck-sophisticate characters. The book is full of clever lines. Other sentences are bluntly worded, but layered in meaning. For example: “We need to be beaten, like children, until we straighten up.”
You and Me contains moments of powerfully sad writing. In one conversation, a character is needled by his friend into discussing why he’s having a “hard time” today. The other responds:

“To put my finger on it, something is percolating in my bowels, my life insurance policy has lapsed because I did not make the payments in time, my tax return is incomplete, it awaits word from my broker whom I believe I have offended with a joke about his deplorable politics, I await word from a colleague at work whom I have offended by calling a nitwit, a willing young woman is to visit with whom I cannot see having carnal relations, with her is an unwilling one with whom I can, yesterday I did not wish to eat anything, apparently do not wish to today, though this coffee is nice, thank you.”

Conversations range from the existential: the meaning of freedom, happiness, and dreams, to the mundane: fast food, yard sales, and television shows. The book’s only named character, an old timey actress named Studio Becalmed, dots the narratives but we never learn much about her.

Mr. Powell asks a lot from his readers. First, he doesn’t make it easy for the reader to distinguish between the two speakers—neither of whom are named or physically described. It is hard to know which character is speaking across conversations. This may turn off many readers.

Mr. Powell also flouts basic literary conventions. For example, one of his chapters consists of only three words:

You and Me lacks an identifiable central event or climax; characters do not evolve over the course of the book. This reviewer wishes You and Me had more story.

Toward the book’s end, Mr. Powell seems to compare himself to Faulkner. One narrator quips, “You sound like William Faulkner.” The other responds: “Who, Mr. Bill? Why thank you.”

The old master and Padgett Powell share a common focus on rural people stoically dealing with sad circumstances. Mr. Powell shares Faulkner’s gift for investing plainspoken dialogue with great meaning. But while the old master stretched storytelling convention, he never stretched it to the point of forsaking storytelling altogether. Faulkner knew that a great novel is built upon a good story; Padgett Powell is apparently unconvinced.