You Already Know How to Be Great: A Simple Way to Remove Interference and Unlock Your Greatest Potential 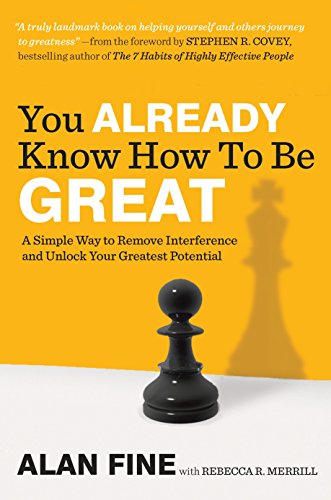 You Already Know How to Be Great reaches beyond coaches to managers, human resource professionals, teachers, parents—anyone whose role requires them to give performance feedback or periodically help others clarify goals.

Fine presents an approach to coaching drawn from the work of Timothy Gallwey who, in the 1960s, was captain of the Harvard University Tennis Team. During those years, Gallwey learned a meditation technique he believed enhanced his ability to concentrate in a manner that improved his game. He further developed this method of concentration and its link to high performance and called it the “inner game,” which he wrote about in his book, The Inner Game of Golf.

Just as Gallwey found applications for his “inner game” beyond tennis, many of the examples in You Already Know How to Be Great demonstrate how to use GROW outside of sports: in business, life, and executive coaching as well as in day-to-day performance improvement. A variety of examples are presented in a dialogue format with parenthetical explanations of the why behind the coaches’ actions, guiding the reader to identify the particular coaching skill being used and to understand its purpose.

Some of the terminology and formulas Fine uses to explain his theories may be new to experienced coaches, but most of his concepts won’t be. For instance, he presents a formula he calls K3F that stands for Knowledge, Faith (our beliefs about ourselves and others), Fire (energy, passion, motivation and commitment), and Focus (what we pay attention to and how we pay attention). He makes the case that all four are needed to achieve performance success, and that often when greater performance is desired the tendency is to attempt to increase knowledge—what Fine calls an “outside-in” approach. He agrees that at least basic Knowledge is essential, but believes the impact of Faith, Fire, and Focus is so significant that he is “increasingly convinced” they are what separates high performers form everyone else.

He contends that an “inside-out” approach is needed to unblock Faith, Fire, and Focus that it is “less about adding new knowledge and more about eliminating the interference that’s getting in the way of experimenting with and using the knowledge we already have.” His formula for this is P = C – I (Performance = Capacity – Interference.)

The idea that internal obstacles—or as Fine calls them: interference—can be more damaging to performance than external ones won’t be a new concept to experienced coaches who generally believe the client is resourceful and hold their own answers inside.

Business leaders and managers who want to coach more but struggle to find the time should find a case study demonstrating how a coach uses KF3 and GROW to help a client identify and commit to performance goals in as little as ten minutes especially appealing. They will also recognize the challenges and benefit from the suggestions in the chapters on Coaching for Engagement and Inside-out In Teams and Organizations.

You Already Know How to Be Great’s content goes far beyond KF3 and GROW, offering a wealth of additional information and making it clear that Fine knows his field. There are many references to well-known theories and tenets of coaching, related research, books, and articles. While these concepts will be familiar to seasoned coaches, less experienced coaches and others will likely find many new avenues to explore. The inclusion of this information is both a strength and drawback of the book.

At its core this is a book about three things: a paradigm (inside-out), a principle (Focus), and a process (GROW). At its best, it’s a how-to for using these tools to eliminate internal and external interference and achieve high performance. Fine makes a convincing argument that less interference—not more Knowledge—leads to success and that layering on Knowledge can block Faith, extinguish Fire, and consume Focus. The irony is that his book is crammed with knowledge, and at times the references to psychological and coaching theories may distract readers and translate to interference.

Many of Fine’s case studies and examples show the economy and “simple elegance” in his approach. The simplicity of GROW makes the coaching process user-friendly not only to experienced coaches but also to business leaders who aspire to coach others to success. A less jam-packed presentation could have made the KF3 and GOAL lessons more accessible and focal. In this regard, Fine missed an opportunity to have the writing style support his theories by relying more on showing and less on telling.

Carol Brill had been a human resources and leadership development professional for 25 years. She has published numerous articles and essays.