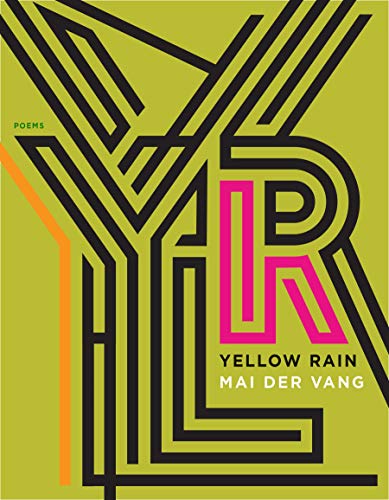 Mai Der Vang’s second book of poems is a master work in hybridity and composition, a testament to the intersection of archival research and poetry.

Yellow Rain is also a meticulous history lesson and a revelation, unearthing too-long ignored truths about the US government’s culpability for the brutal suffering of the Hmong people in the mountains of Laos: “If love is / the sacrament of digging,” Der Vang writes, “then / Here I hold my found into fire.” (“Manifesto of a Drum”)

Juxtaposing her poems with excerpts from Department of State reports and declassified government cables, as well as facetious academic papers written by members of the scientific community (many of whom had obvious conflicts of interest), Der Vang illustrates how the US exit from the Vietnam theatre was really no exit at all; how the world’s super powers used the Laoation jungles as a chemical weapons dumping ground post-Vietnam; how physical evidence of this poisoning was collected from the Hmong people and then poorly packaged, damaged and compromised in shipping, and ultimately destroyed; and how a weak, ridiculous theory about bee excrement (“yellow rain”) was used to just barely cover up an egregious act on the part of the US government.

With Yellow Rain Der Vang creates new forms of found poetry, using collage, overlapping text, and gradient ink to make clear the way information is often blurred, transposed, decontextualized, and hidden in an effort to protect government interests. Her poems also reveal the extent to which the Hmong people suffered once members of the US military, whom the Hmong aided during the Vietnam War, evacuated Laos and left them to be hunted by ruling communist forces.

“A toxin is a / toxin is a toxin is the man / made truth is the dead who / leave everything behind” writes Der Vang in “They Think Our Killed Ones Cannot Speak to Us.” Her poems lament, rage against, and grieve for the Hmong, but stop short of speaking for them.

The ingenuity in this book lies in Der Vang’s graceful and deft craft choices, such as her conspicuous rejection of the persona poem and appropriation of voice. A US American Hmong descendant, Der Vang would likely meet with little criticism if she’d chosen to write in the voice of those who suffered the effects of trichothecene mycotoxin exposure.

Instead, Der Vang addresses the Hmong with her early poems in the book. She does not speak for them. She loves them, she empathizes with them, she pleads with them, but she does not steal from them. Rather, she pledges to bring their story forward, to insist on it, to refuse its further burial:

“Believe me as a

torch of this wandering

that I have been digging

within the origins of

I am sending you.” (“Guide for the Channeling”)

When Der Vang does engage in persona poetry, it’s toward the end of the book and done sparingly and still with an eye toward speaking to the dead, instead of for them—as with “The Shaman Asks about Yellow Rain”:

“What of the power, as if sand had been thrown

In your face, as if innards

To leave you. How long before your flesh slipped off?”

By refusing to adopt or parrot the voice of the disappeared, mutilated, and displaced Hmong, Der Vang refuses to engage in further acts of violation against her people. Her choice also underscores that this subject does not require the dramatic conceit of a persona poem in order to keep the reader’s attention; indeed, the subject matter is tragically too full of horror and pathos.

And Yellow Rain does hold the reader’s attention, which is rather incredible considering the book’s length. At 206 pages, Yellow Rain is remarkably long for a book of poetry authored by a single author (aside from the “collected work” of established poets, of course), and yet each page and poem feels necessary. Building her argument line by line, epigraph by epigraph, and composition by composition, Der Vang moves toward an inevitable conclusion, which lacks finality and resists the appeal of a tidy ending. Rather, the last pages hold her promise of a reckoning:

“I circle. I pour into the rains. And I will chase them down,” she writes in the untitled preface for the closing poems of the book, “until the seasons dry out and the clouds unfold before me the light of a new storm.”

Sarah Kain Gutowski is the author of Fabulous Beast: Poems, runner-up for the 2018 X.J. Kennedy Prize, winner of the 14th annual National Indie Excellence Award for Poetry, and a 2019 Foreword INDIES Finalist. Her poems have been published in The Threepenny Review, Painted Bride Quarterly, The Gettysburg Review, and Phantom Drift: A Journal of New Fabulism. She is a professor of English at Suffolk County Community College.