The Year of Dangerous Days: Riots, Refugees, and Cocaine in Miami 1980 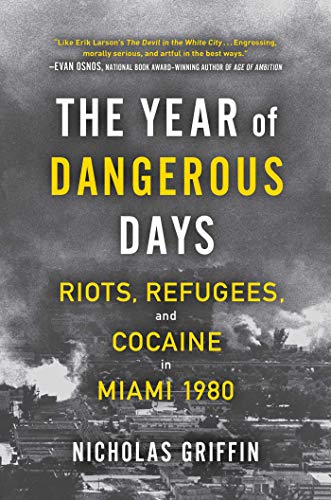 “1980 was an astonishing year for Miami that changed the metropolis forever.”

There is one major exception, however. Miami is different. It is a Latin city with a large Black population and the remnants of a New York Jewish enclave that once ruled Miami Beach. Today, Miami is the business capital of Latin America.

Nicholas Griffin, a marvelous writer of fiction and nonfiction, has crafted a book that explains how Miami evolved within a single year, 1980. The Year of Dangerous Days: Riots, Refugees and Cocaine in Miami 1980, is a well-written narrative of the events of that transformative year.

The first portion of the book focuses on the reaction of Blacks to the acquittal of county and city police officers who butchered Black motorcyclist Arthur McDuffie. McDuffie had led the police on a chase through the poor neighborhoods of Liberty City. When the racing police cars had him cornered, McDuffie gave up . . . only to be beaten to a pulp. As a result of the press coverage of the police carnage, criminal actions were brought against the offending police. The trial was relocated to Tampa. The quick and unanimous acquittal triggered riots in the Black neighborhoods of Miami.

Throughout the narrative, Griffin focuses on the role of the Miami Herald and its indefatigable reporters. Often in coordination with the police, the Herald would scoop out sources and fill in details. The press would not let the McDuffie story die even after the felonious police were exonerated.

Griffin then turns to the enormous impact that the 1980 Mariel boatlift of Cubans had on Miami. Fidel Castro opened the gates of his prisons and allowed tens of thousands of undesirables to float north to the Florida peninsula. They were welcomed by the Cuban immigrants who had escaped from Castro’s Cuba 20 years earlier. The “Marielitos” cemented the Latin nature of the City.

Finally, Griffin explores the effect of the importation of cocaine into Miami, primarily from Colombia. The City of Miami floated on cocaine cash in 1980. Colombian accountants immigrated to Brickle Avenue to handle the laundering of dirty money at Miami’s banks. The Colombian cartels also brought their guns and lethal feuds to Miami, and their denouement often played out on the streets of the city.

Griffin writes nonfiction with a spice of fiction. His character development excels. 1980 was an astonishing year for Miami that changed the metropolis forever. Walking down Caya Ocho, any visitor could tell that Miami had become firmly fixed as the capital of Latin America. This is not just another cookie-cutter American town.