The Year 1000: When Explorers Connected the World_and Globalization Began 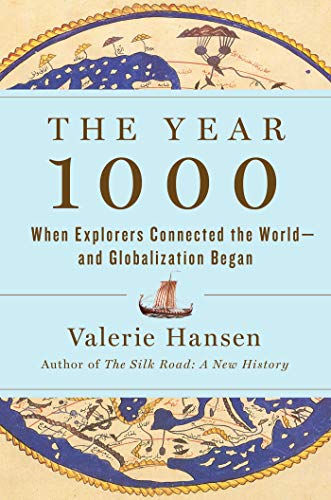 “Hansen’s narrative illuminates the Dark Ages in this masterwork on globalism.”

Students of history have significant gaps in their knowledge base. They know something about Rome and Greece, but nothing about contemporary civilizations located outside of Europe. They know about the United States from the Revolution through the Second World War, with the exception of the real stories of slavery and the lives of Native Americans. The time period between the fall of Rome and the Renaissance—a thousand years—is empty, not including the Black Plague which they know killed about half the population of Europe.

Professor Valerie Hansen attempts to fill that gap in her new book, The Year 1000. Focusing on international trade routes, Hansen covers global channels of commerce that were established long before Western Europeans began to travel the Atlantic. It was a massive challenge to cover almost a millennium of events. Hansen’s work is written in a workmanlike style much like a college textbook. Each chapter starts with a map to assist the reader. There are nuggets of facts that demonstrate the extent of Hansen’s expertise, data that will add to the knowledge base of even the most skilled professional.

A recognized scholar of Chinese history, Hansen is the Stanley Woodward Professor of History at Yale University. What is particularly notable about Hansen’s narrative is how similar commercial transactions were around the globe. Merchants transported comparable goods from port to port, pocketing the increments in value.

Americans tend to believe that the importation of slaves to North America was a unique crime. Hansen debunks that myth. Commercialists transported slaves from Africa, Eastern Europe, and Russia. They were a valuable trading commodity almost everywhere except China, which had a surplus of labor. If America was immoral in enslaving black Africans (and we were), then the entire world must bear that evil as well.

The other common trade goods were spices and aromatics, especially in China. The sense of smell seemed coincident with social status. Trade goods in ceramics, paper, silks, and gold filled the vessels that circumnavigated the globe.

Hansen starts her tour with the Norse explorations across the North Atlantic. Hundreds of years before Columbus ventured west, the Norse had established settlements in Newfoundland, Nova Scotia, and Maine. Unlike all the other commercialists covered by Hansen, the Norsemen adventured primarily for plunder and not trade. When they found the climate unsuitable, they returned to Scandinavia.

Hansen then turns southward to Central and South America. Here her focus on commercial globalization broadens to an informed discussion of the Inca and Mayan empires. Returning to Europe, Hansen tells the little-known story of the Rus, the Scandinavian wanderers who sailed east and not west. They gave their name to Russia. One focal point of her discussion is the importance of religion. The Rus prince Vladimir converted his tribe to Byzantine Orthodoxy after considering which religion would give him the greatest potential for allies and commerce. He had received presentations from all the area’s religions, including Judaism, Islam, Byzantine Orthodoxy and Roman Catholicism. While a strange way to select your faith, it worked for Vladimir.

Hansen covers Africa, South and East Asia and China in the same detailed fashion. Hansen’s narrative illuminates the Dark Ages in this masterwork on globalism.