Yanks in the RAF: The Story of Maverick Pilots and American Volunteers Who Joined Britain’s Fight in WWII 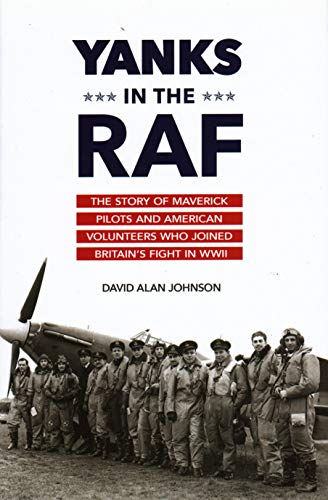 In the category of military history, the most interesting accounts can be those of a personal memoir or an obscure nature. The former provides an inside look into a warrior’s personal experience, and the latter brings to the fore a more than likely unpublicized or little known event or occurrence. Although the topic of this volume has seen some coverage over the years, it is still a relatively unfamiliar one with most Americans who think that their military only arrived in Great Britain starting in mid-1942.

Nothing could be further from the truth. An unknown but large number of young American men made their way directly to the United Kingdom or via Canada and its air force in order to enlist in the Royal Air Force and join the fight in the European Theater long before any direct involvement on the part of the United States. Although forbidden to do so by Act of Congress (the Neutrality Acts) and thereby threatened with legal consequences and even loss of citizenship, the motivations of these young pilots for doing so was as varied as their origins and backgrounds.

Most were already licensed pilots or otherwise involved in some aspect of aviation, including one who was essentially a professional parachutist of the barnstorming variety. In any event, their prior flying experience, even if extensive, did not necessarily mean that they would be immediately thrown into combat, notwithstanding Britain’s desperate need for pilots to confront Germany’s Luftwaffe. It was paramount that these willing and eager volunteers be properly trained to fly the types of aircraft employed by Britain, primarily the Spitfires and Hurricanes of Fighter Command, before being thrown into combat with the Germans.

Also, as author David Alan Johnson points out in the text, it was a matter of culture shock for all as well as overcoming the image which existed previously where the British were considered virtual enemies due to the American Revolution, the War of 1812, and diplomatic clashes during the Civil War.

The British were just as unfamiliar with their cousins from “across the pond” as the Americans were with their hosts. There were many misconceptions and much looking down each other’s nose, considering the class-conscious British and the egalitarian Americans. It was just as apparent that there was a language barrier, in spite of their common tongue, especially in matters of aviation.

In spite of their mostly undisciplined, nose-thumbing at authority, fun-loving and, at times, hell-raising ways (largely unappreciated and which shocked the British), these American pilots did make their contribution to defending the United Kingdom in the Battle of Britain through mid-1942.

At that point, the three ultimately organized “Eagle” squadrons were re-assigned to the United States Army Air Force (some remained in the RAF through the war, at the same time regaining their citizenship). Indeed, one pilot, William Dunn, was credited with being the first American “ace” of World War II, long before America’s participation in the conflict.

This is as much a combat account as it is a personal look at these initial American heroes, their experiences and sometimes tumultuous relations with the British. Although the notes are not terribly extensive for each chapter, the author did consult a variety of sources, primary and otherwise, listed in a Select Bibliography, and the text is interspersed with many relevant photographs.

There are no maps, which is somewhat unfortunate as the theater of operations and the various airfields at which the Eagles were based could have been shown. There is a relatively short index and the two appendices, respectively, describe equivalent ranks between the two air forces and list the names, assigned Eagle squadron and fate of each known American pilot. As can be seen from the latter, there were many who made the ultimate sacrifice in combat, died of wounds, in flying accidents, etc.

As this book is made available for public sale just after Memorial Day, it is appropriate that the sacrifices of this particular group of Americans should be honored and recognized. They were first into the fight when America was doing its best to ignore the conflagration in Europe and remain isolationist. As such, they were part of the “Greatest Generation.” That this summer is the 75th anniversary of the Battle of Britain, it is gratifying that this rather obscure part of World War II is seeing more of the light of day.