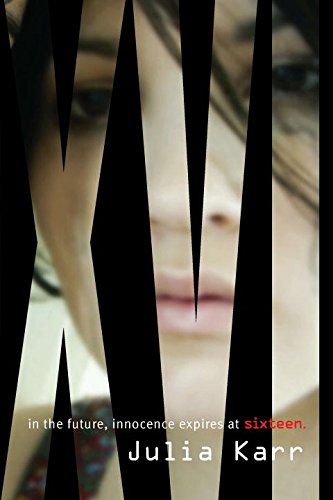 Nina Oberon is a few short months away from turning 16, and she can’t think of a worse fate. Nina’s best friend, Sandy, thinks 16—or “sex-teen” as it’s called—can’t come soon enough. Sandy dreams of the day she’ll get the government-mandated “XVI” wrist tattoo signifying that she is now legal—to have sex.

Nina’s mother, Ginnie, has spent years educating her daughter on societal and government lies associated with turning 16 and is doing everything she can to protect her daughter; however, just weeks before Nina’s birthday, Ginnie is gravely injured in a vicious attack. Kept alive in a special machine, Nina leans in to hear her mother’s dying wish: Nina must deliver a baby book to her father and keep her little sister, Dee, away from Ed—Ginnie’s abusive boyfriend and Dee’s father.

Nina is not only being torn apart by the imminent death of her mother, the worry of taking care of her little sister Dee, and uprooting her life to live with her grandparents; but also, for the past 15 years, she’s been told that her father died in an accident just after she was born.

Now Nina will have to find the father she never knew, while protecting Dee from her own father, who seems to be after something important and will stop at nothing—even murder—to get it.

With so much to deal with, Nina tries to clear her mind by going to a place she and her mother often went. Upon her arrival, she sees three letes (athletes) beating up a homeless person. Nina steps up and the boys turn their attention to her. Leeringly they make a few suggestive remarks, but when Nina holds up her wrist they can see she’s not fair game—however, Nina has still put herself in harm’s way—as letes are allowed to do anything they want.

Nina approaches the homeless person, who turns out to be a boy her age—a very cute boy—named Sal. Far from homeless, Sal is upper tier and seems to know more about her father than she does. Over time, Nina finds she’s falling for him, but is afraid Sal is only after information about her family.

With the help of her friends and the love of her grandparents, Nina will find out that things are not always what they seem as she finds the strength to carry out her mom’s wishes and protect the ones she loves.
XVI is Julia Karr’s debut novel and the first of three in the series; it is a dystopian tale set in 2025, when the U.S.A. as we know it no longer exists due to the “End of Wars Treaty” that was passed, along with a new government, the GC (General Counsel). We have now settled on the moon—known as “The Dark Side”—and media plays a very central (read: controlling) role in the lives of the people.

Constantly assaulted by a profusion of “verts” (advertisements) makes it difficult for the everyman to think for himself. From the latest gadgets to the sexiest fashions, the verts do all the thinking for you. While many have fallen under control of the media, others, known as NonCons, lead the resistance in an effort to restore free thinking and less government control.

Julia Karr’s incredible debut novel is written in a clear and vibrant voice. XVI moves at a rapid pace with a diverse cast of well-developed, interesting characters that stand so well on their own, that when they’re combined together, the result is a solidly-structured plot line in perpetual motion.

Despite the dismal outlook for females in the future world, Julia Karr has created very strong-minded female characters who use their strength to fight back and not give in to societal pressures or accept a lesser station in life.

With the incredible pressure that teens are under today, it’s nice to have positive role models like Nina to demonstrate that despite what life may have in store, you can still be an individual, take a stand, and think for yourself.