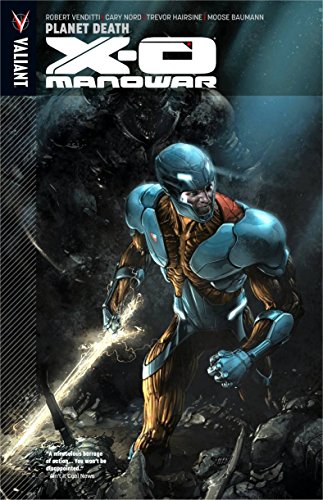 Like a perfect mash-up of pop, classical and trance music that keeps dancers going for hours, X-O Manowar combines various comic, adventure, and sci-fi concepts, in the process creating something new and exciting.

The story begins in the fifth century where a band of Visigoths are standing tall against a massive Roman Legion threatening to bring down all unholy hell upon their assembly.

As the Visigoths tend to their wounded, aliens land in the battlefield and begin marching toward them. Their ultimate goal is to take over human babies, leaving the door open for the alien life form to use the planet to harvest their own offspring.

When the Visigoths see the foreign machines they, being Visigoths, fight. Naturally they stand little chance of success, what with the aliens having machines, lasers etc. Upon their defeat the Visigoths are taken aboard the alien ships to work in the alien fields.

The aliens (who are called the Vines) worship a metal ball that seems to have a mind of it’s own as their deity. The person who can wear the blue and gold suit that evolves out of the metal ball will be the chosen one.

Unfortunately, despite being worshiped, the metal suit that envelops the potential chosen one just kills the victim. Despite the repeated deaths that occur, the Vines step up to the plate time and time again to try on the armor. And time and time again they each die . . .

After months in slavery, the captured Visigoths try to escape. On the way out one of them, the royal leader named Aric, encounters the metal ball. After centuries of feasting on Vine Alien meat, the metal ball takes hold over the captured Earthling ultimately revealing him to be the chosen one.

The Vines aren’t happy. After all, this incredible suit was supposed to wrap itself around one of them! Being a stunningly violent race, the fights that come about as a result of their disappointment are bloody and brutal.

This wild mix of Gladiator, Roman Wars, Alien Pod babies, false idol worship, space travel and about a dozen other sub-genres of modern fiction makes X-O Manowar a wonderful and fresh concept. This is comic and sci-fi writing at its best.

Much of this is due to the writing of Robert Vendetti. As the story moves through issue after issue, it is obvious that he and the creative staff at Valiant Publishing (led by Dinesh Shamdasani) are in for the long haul. The storyline can become a bit complex, but you will never feel lost.

What makes so much of the writing work is that Aric never behaves as anything other than a fifth century Visigoth. In Volume Three: Planet Death (which collects issues #9–14) Mr. Vendetti begins to open up the hero at the center of it all. Even when he finds himself on a space ship or in the twentieth century, his reactions and the fear he has remains true to what he is, essentially a barbarian.

As the story grows around him and expands into Galaxies, Aric grows with it. In this collection he has begun to become one with the armor that seems to take over his life.

Mr. Vendetti allows him to learn and grow as he becomes aware of what he possesses. There is also real development in how he now chooses to display his mercy and understanding. Still, the desire to solve problems with force never leaves him. He is always ready to defend himself or his people in the most extravagant and vicious way.

Reading successive issues in a row as complied in the trade paperback format makes it clear that, like the best of Science Fiction, there are very subtle and quiet statements being made about the real world inhabited by the readers. They are there for you discover or ignore.

As the Alien Priest verbally spares with the Military Leader, the contempt held by the General for everything around him comes into plain view. Filled with the hubris of his supposed correctness, the General trashes the belief system with the idea that another one will evolve, so all belief is pointless. All that matters is might.

As he does it becomes clear that the power of might making right is the only thing he believes in. To him, his power grants him the right to pass judgment on them all.

An even more very basic idea is at the core of the argument (and subsequent action). It is that without faith, all is pointless.

The art by Cary Nord is the other half of the reason that X-O Manowar succeeds. His depictions of space battles and even space itself are among the best in the business. There is a true sense of dimension in what he shows us.
Working with colorist Moose Bauman, the two slip bucolic moments of grace amid the explosions, fight scenes, and starships.

Volume Three begins the closure of a major story arc concerning the planet where the Visigoths have been held in slavery. There is a terrific summation of the previous action at the beginning of the book. You do not need to have fully read the previous issues to enjoy this collection.

From John Carter of Mars to Buck Rogers, the idea of a fish out of water on another planet is a great idea. But it is a hard one to pull off well. Mr. Vendetti and Mr. Nord do it with style and intelligence.

X-O Manowar is a thoughtful and thrilling action- packed trip among the stars and the past.