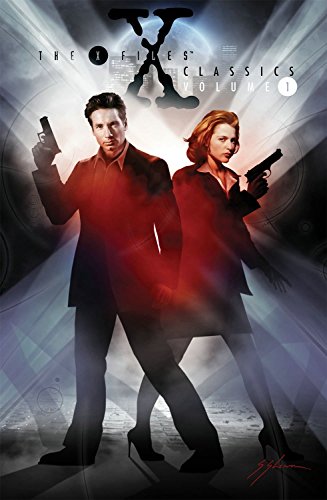 “. . . a killer collection of some great stories.”

This year is the 20th anniversary of the pilot of The X-Files. From the minute it premiered the series was a blast of fresh air, paranoia, aliens, and paranormal energy into a relatively stagnant television season. Today several of the episodes regularly find their way onto lists of the best TV ever.

The adventures of Mulder and Scully went on to thrill viewers for nine seasons in total. Today the series is remembered as one of the best ever. The stories showcases over the course of its long run continue to influence a new generation of writers in sci-fi, horror, mystery, and adventure.

While the show had a tremendous number of loyal fans, many of them missed out on an ancillary source of great writing. During the show’s third and fourth season a series of comic book issues were published that for those who read them seemed to capture the spirit of the series.

For years certain issues of that title’s run were hard to find. Reprints filled the gap but often fell short in terms of availability and or quality. IDW Publishing recently corrected that oversight by gathering the first nine issues into a brand new deluxe hardcover.

The first issue in that run was particularly hard to find when it first hit newsstands. “Do Not Open until X-Mas” begins with a priest in his confessional. As the page opens out we see the blood dripping across the floor from the other side of that most sacred space. The action culminates in the victim crashing spectacularly threw a stained-glass window.

The action picks up in classic X-Files style as we see a black and white slide-show with a voice-over relating a classic story of a missing child. The show is interrupted first by Scully saying how much she missed these little displays. Then Mulder walks across the light of the projector. Nothing major at all, just a good, classic X-Files set-up.

The story itself stays true to the spirit and feel of a good episode of the series. One of the reasons that the adaptation works so well is the work of writer Stefan Petrucha.

Today the novelist is known for having created the popular Time Tripper series. But in 1995 when these stories were first published he was coming off of a run on various science fiction comics and a short stay on Duckman. As good as his work always is he may have created his best work on The X-Files.

Over the course of the nine issue reprinted here there are several solid story arcs. The first three issues stand alone but in number four a three-issue arc begins that is among the best in the title’s run.

Firebird brings Mulder and Scully to the Southwest as they look into stories of an alien visitation. Almost all of the classic X-Files motifs are present and the second issue in the story, issue number 5, ends on a particularly strong note as Scully has to open fire. As to Mulder, he is last seen being led handcuffed into a darkened chamber.

Many fans of the series consider number seven, “Trepanning Opera,” another classic. The two agents are on the trail of a serial killer who seems to have the ability to see in the future. The book closes with a two-part episode set in Alaska where there appears to be a city that may have once had something to do with the Aztecs . . . !

Artist Charles Adlard captures the likeness of the stars in a very realistic manner. His work on the backgrounds is detailed and complete. The action sequences flow easily from previous panels and when he ahs to surprise us with an image he comes through with imagination.

When he chooses to go to a two-page spread, such has he does in the first chapter of Firebird, the work captures the tone of the piece without being a showcase for his individual style. His respect for the subjects shows through.

Today it isn’t unusual for a TV show to have a strong second life inside comic media. New seasons of Buffy the Vampire Slayer live on over at Dark Horse and IDW is currently publishing X-Files Season 10 with series creator Chris Carter on board as an editorial advisor.

When the stories reprinted in this collection first came out many felt that no comic could accurately capture the look and feel of a TV series consistently. The X-Files comic book helped change that perception and set the stage for the great work we see being produced today.

This is a killer collection of some great stories. It is a must for any fan of the series.
And besides, issue number three has the first comic-related appearance of The Lone Gunmen. How can you not want to read that?