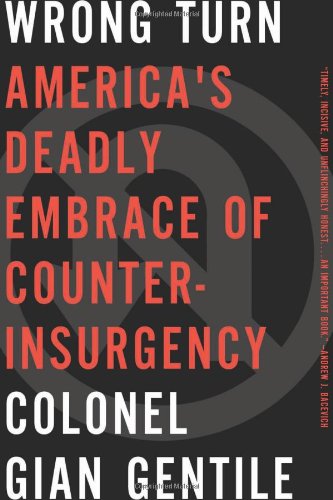 “It is well worth reading this book for the argument is cogent and well documented, . . .”

The news from Iraq is still pretty bad. This book, by an American colonel who had a combat battalion command in Iraq, goes a long way to explaining why.

April 2013 was Iraq's deadliest month since June 2008, the United Nations mission in Iraq reports. A total of 712 people were killed, including 595 civilians, in "acts of terrorism and acts of violence" last month .

Many in Iraq are now calling for the creation of two new separate federal regions on religious grounds: a Shia region and a Sunni region—there is already a Kurdish region that is effectively independent. It’s possible that this would end the fighting—but there is no clear view looking forward.

The mess in Iraq has lasted since the American invasion and occupation, and no policy created in Washington has done much about it. Today, as former director general of the al-Jazeera television network Wadah Khanfar points out, the entire Middle East is now undergoing the most important geopolitical shift since the political map of the region was redrawn after the First World War . American policy is in no way prepared to meet this challenge, as it struggles with challenges in Afghanistan and Iraq.

Colonel Gian Gentile is particularly qualified to criticize U.S. policy. First of all, he has served two tours in Iraq, first as the executive officer of a combat brigade in Tikrit in 2003, and then as a squadron commander in western Baghdad in 2006. Then Colonel Gentile has a doctorate in history from Stanford University. So Colonel Gentile has not only seen the mess in Iraq first-hand, he is also capable of putting it into perspective.

From the perspective of policymaking, Col. Gentile’s book is of great value. He very capably traces the origin and effects of the concept of counterinsurgency, the “new philosophy” that was supposed to change everything for the war efforts in Afghanistan and Iraq.

Former general David Petraeus was supposed to have snatched victory from the jaws of defeat in Iraq using the counterinsurgency approach—of course, we now know that didn’t happen, but, at the time, there was a huge build-up in the national press for that idea. Gentile’s book shows where the counterinsurgency philosophy came from, how it was applied, and what was wrong with it. Ultimately he shows that it is inherently flawed: It is, in fact, a “Wrong Turn” for American policy.

It is well worth reading this book for the argument is cogent and well documented, but be prepared for an uphill battle. The style is often rather frenzied, and the prose can sound like a rant. Look at the silly title! I cite only one more example, in this case, the last sentence:

“The idea that any of this ever made sense or has ever worked should be buried deep in the ground, yet the belief that counterinsurgency works persists like a vampire among the living.”

You can see the freshman instructor of expository writing chuckling over the mixed metaphors, but it’s really not funny. A man who has so much of importance to say should take better care of his means of expression. (We have long since abandoned any hope of attention in these matters from publishers who seem to spend all their time on Twitter these days. . . .)

To return to the argument, Col. Gentile very capably shows that counterinsurgency, which can be roughly summed up as a “nation-building” strategy, didn’t work in the past, when the British tried it in Malaysia, nor when the U.S. tried it in Vietnam, and that it certainly did not work in Iraq and Afghanistan, despite the hype it received when it was tried.

A separate chapter is dedicated to each of these efforts, and Col. Gentile goes into sufficient detail to make a very good case. Col. Gentile then shows that the strategy is fundamentally flawed, and cannot work in the form that it has been proposed.

The argument is summed up well by the author at the end of the book:

“There was a better strategy available to American political and military leaders from the start. Our senior leaders could have discerned early the folly of trying to build Afghanistan into a modern state overnight and would have deduced (sic) that the core policy of destroying al Qaeda could have been done by a much smaller force concentrated against the few remaining al Qaeda left after the Taliban had been removed in early 2002.”

The same point is made, grosso modo, for Iraq. Had we pursued a strictly military policy of controlling the enemy, we might have succeeded, at least, at that. Instead, we attempted to build a new nation, and we achieved nothing. Neither Iraq, nor Afghanistan is a stable new nation. And the support of the civil population, which the counterinsurgency policy is supposed to achieve, never materialized.

The attraction of the counterinsurgency idea is that it is about “soft power,” about making war in a different way, one that is morally better. Unfortunately, as Gian Gentile shows conclusively, war is about destruction and death. One may well argue that waging war successfully, however dismal that process is, would be far better than dedicating men, time, and resources to a doomed effort to hold the moral high ground.