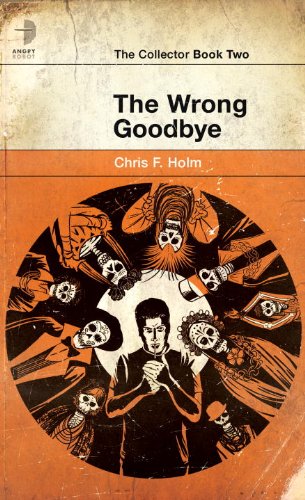 Trying to maintain a low profile after almost—unwittingly—triggering a war of apocalyptic proportions between heaven and hell, soul collector Sam Thornton just wants to do his job and stay out of the spotlight for a while. Unfortunately for Sam the spotlight plans to stay trained on him for a little while longer.

After trudging through the dangerous South American jungle for what seems like forever, Sam finally spots his target: Pablo Varela, one of the world’s most fearsome and dangerous drug lords.

There’s only one problem: Varela is already dead and his soul harvested. The only thing remaining is a note to Sam etched into Varela’s chest left by old acquaintance and fellow collector Danny Young.

Sam’s effort to get to the bottom of Danny’s unforgivable treachery leads him on a methodical scavenger hunt. Accompanied by the reseeded soul of a gruff, but loveable Mafioso, Sam traverses miles of desert that takes him across borders and ethical and legal boundaries, kicking up unfathomable chaos in the process.

In between assaults by avenging angels, terrifying men made of the creepiest crawlies, and other inhuman things that go bump in the night, Sam must confront a few of his own personal skeletons in an effort to clear his name, restore balance, and—oh yeah—save the lives of millions of people. But hey, no pressure.

Following on the heels of his fantastic debut Dead Harvest, the first book in the Collector series, which set the bar—and reader expectations—quite high, in this next installment, Chris Holm has his work cut out for him, but saying he hits a homerun with The Wrong Goodbye would be an understatement. He absolutely crushed it.

The author’s ability to delve into the most random or basic and make it surreal is probably one of the most fascinating things about reading Mr. Holm’s work. The brilliance behind his storytelling lies in its depth. Anybody can set a scene, but Chris Holm blasts every one of the five senses, allowing the reader to live and breath all the action as it’s happening.

Never knowing what crazy road trip shenanigans, wild tangents, or supernatural mythology the author will dish out next is all part of the fun, but whatever Mr. Holm serves up sounds so ridiculously possible that you’ll eat it all up with a spoon and ask for seconds. Demon drug dens? Sure. Skimming souls? Fine. A mangy, cloven hooved, cyclopean Rottweiler-esque demon dressed in leather? Okay, then!

There’s no question that Sam Thornton is a topnotch protagonist, and despite being a demon he is comforting in his continuity, sense of self, and most of all his unwavering humanity. Yet it’s the quality of the secondary characters surrounding him that allows Sam to really shine. From Ethan the milquetoast mortician, the mobster Gio reanimated in the body of a 400 pound sausage king, to good ol’ boy, oil man Roscoe McRae, Mr. Holm’s penchant for creating dynamic supporting roles that shine in their own right, without stealing the show, is an important part of the Collector experience.

Though the books do not need to be read in order, it’s highly suggested. Despite each one’s ability to stand alone, the reading experience is made that much more enjoyable with knowledge of Sam Thornton’s background and previous plights. Besides, why would one want to be cheated out of reading some of the best urban fantasy on the market?

The author’s amazing talent for writing and limitless genius for storytelling guarantees readers a wild ride to places that thankfully only exist in the clever mind of Chris F. Holm.