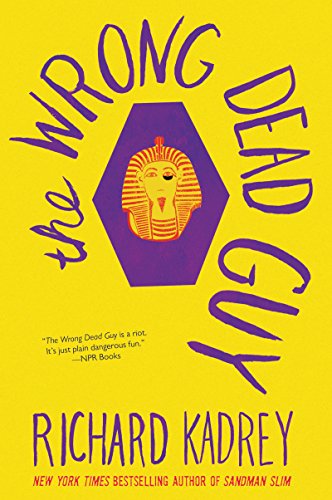 The Wrong Dead Guy’s author approaches sci-fi and fantasy like Michael Bay approaches film making—stuff the visuals with fast moving, dark, unfathomable moments and allow the reader to be the fantasist for a story that takes place in the present day and age—a roller-coaster ride, supposed to be fun. And actually it was, even if the reader does the work of character definition.

Reading this novel, a sequel to the popular The Everything Box, was amusing, and indeed, the author has a great imagination. The true gift of this author is that he is so generous in permitting the reader to actually indulge in their own fantasies, conjuring of characters’ appearances, and, never least, leaping from one reader conclusion to the next, page turning at speed, trying to stay ahead of the question the novel asks (repeatedly): What the hell is going on?

Obviously there is an homage here to Hitchhiker’s Guide to the Galaxy in that events are so preposterous, so ridiculous, you suspend any notion of belief and merely indulge in the weirdness and otherness. And that is, let’s face it, good escapism. Just the name of the agency that the hero, Coop, is enlisted into, is pointedly weird, “the Department of Peculiar Science,” later only referred to as “DOPS” (which this reader often read as “dopes”—which may have been intentional by the author, not without good reason).

There is a plot, and the story expounds well within those bounds the author does establish. The main character, Coop, has the dry humor the novel demands and, since over half the novel uses dialogue to advance the plot, Coop comes off as a narrator much of the time; after all the reader does occasionally need some guidance here.

Or not, since all the monsters, undead, still dead, ghosts, occult, or otherwise compromised characters behave in off-beat and unpredictable ways, the reader is left to fill in the mental visuals. It was a bit difficult following the purpose of some of these characters to development of the plot—their dialogue (pages of it without any narrative) was amusing, but hardly revelatory of the reason for their actions. Since the characters were so well undefined (more like movie script characters forcing the reader to complete a mind’s eye image), the book relies on continual he said, she said, “. . . said Tyler . . . said Linda . . . said Heather . . . said Dylan . . . said Sarah . . . said Warren . . . said Brad . . .” over and over, all these on two pages.

When the author gets to narrative, his work is stronger, but by then he’s hampered with a conundrum: He can’t actually describe any character in case the reader’s mind-eye created visual would not match. What does Coop, the protagonist, look like? The reader has no solid clue except for their own imagination.

Still, there are seriously humorous characters and back-and-forth movie script dialogue. For example, the fast pace of Zulawski and Vargas’ desperation to desert their post is very well depicted and got a solid chuckle, and then came their last paragraph, which threw in two descriptors which might have been useful earlier on, “So they ran. The mime and the Mongol made it to the elevator intact and rode it to safety. They shook hands in the garage, pledging to meet again in a week to talk things over. Neither of them had any intention of going to the meeting.” Funny stuff, sardonic even. Similarly the back-and-forth between two other characters Nelson and McCloud is repeatedly amusing.

The antagonists, Harkhuf and his more powerful female adored one, Shemetet, are lifted from so many movies (The Mummy, I, II, III, and so on) it was hard not to pass quickly over them. What did make Harkhuf fun, however, was that he was surrounded by minions (called “thralls”) who were serious dimwits, and his patience in dealing with them kept a smile on the reader’s face.

Later, almost at the end, when he’s desperately trying to find the mysterious incantation to invoke “Revivication of Royalty” for Shemetet, the incantation is hidden in a cookbook read out by Kevin his thrall . . . “And there’s a whole section here on egg whites. No. That’s about resurrecting a soufflé. . . . I think . . . I think . . . it wants you to raise the dead with a chocolate brownie. . . .”

But no one has any chocolate to use to make the recipe, until someone finds they have a Snickers. But it has nuts, to which Harkhuf responds, “Shemetet has a nut allergy.” Kevin responds, “Peanuts out. Give me a couple of minutes, Your Immeasurable Hugeness.” Harkhuf is perhaps the most sardonic character in the book. His response to Kevin’s’ incompetence? “Harkhuf started to say something, but he let it go. There would be plenty of time to kill Kevin later.”

Finally, clearly the author is setting up a sequel for Coop—and that’s made plain right in the first chapter as well. Coop has saved the world, again . . . sort of inevitable given events throughout the reading. There is a girlfriend who popped up (from the first book in the series) and helps round out the story, buying him a hungry cat that steals his hamburger for no reason other than, perhaps, to reinforce that Coop is, was, and will remain a thief by nature and desire.

Peter Riva is a literary agent and an author of books in two areas, science fiction and African adventure.